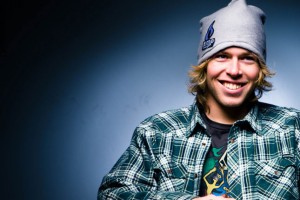 Those are just a few of the adjectives that came to mind after watching the documentary called The Crash Reel – the story of former pro snowboarder Kevin Pearce who, while training for the 2010 Olympics in Vancouver, endured a near-fatal crash that lead to a traumatic brain injury on December 31, 2009. This kid is lucky to be alive. So unbelievably lucky to be walking, talking and to be a person in general.

After his crash he spent almost a month in the ICU. The footage of him connected to wires, looking bug-eyed and barely able to move or talk is rough. Really rough. His memory was shot, his medication was intense and he literally had to learn to do everything again. How to be a human again.

What’s incredible was how his family rallied around him and took care of him. The youngest of four brothers, Kevin is a cherished son. His two eldest brothers were also pro snowboarders and his other brother, who has Down Syndrome, won medals for skiing in the Special Olympics. His parents did everything in their power to heal their son. They went through years of agonizing surgeries and rehab with him. All five of his family member stood by him and got him back to being a functioning human again. They are heroes.

And you know who else are heroes? His group of best buddies who stood by his side through everything. This group of friends who call themselves “FRENDS”(there is no “I” in friends) are a force to be reckoned with. The support Kevin’s family and friends have given him makes him one of the luckiest kids in the world. It’s amazing and nothing short of inspiring.

Another aspect of the film that’s interesting is the rivalry between Kevin and Shaun White. A lot of back and forth about who was better and what it was going to take for Kevin to beat Shaun White in the Olympics. Luckily White has never had any serious injuries and I hope he never does. I hope no other snowboarder in the history of the sport has to go through what Kevin Pearce went through. It’s harrowing.

Throughout the film there were several conversations Kevin had with his family about his yearn to go back to snowboarding. They didn’t want him to ever get back on a snowboard and but he decided that needed to do it. He thought that he was going to be able to compete in the Olympics. Two years after his injury he competed in an event without telling his family and comes to the realization that that he will never again be good enough to snowboard professionally. He also comes to the realization that he’ll never be the same again.

We can’t possibly imagine what it’s like to suffer such a huge, life-altering injury. He has double vision, he says things he doesn’t mean to say and is irritable with others– in short he’s not the same person.

If that’s not tough enough to watch, next we see that pro skier Sarah Burke did the same thing. She crashed while training for the X-Games on the same half pipe and suffered the same type of traumatic brain injury that almost Killed Kevin. Except Sarah didn’t survive. And the cost of her healthcare was almost half a million dollars. So sad and such a loss at such a young age.

At the end of the film Kevin gets another reality check when he meets another former snowboarder who is an absolute jerk as a result of his brain injury. No edit function and tough to be around. He’s awful. Kevin tries to talk to him to no avail. But that leads to Kevin talking to groups and at conferences about what happened to him. He has now accepted that his life has changed and he will never be who he was before. If that’s not brave I don’t know what is.