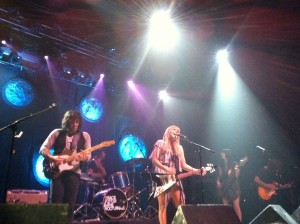 Who said that my generation missed out on the best of rock & roll?  I did.  Many times.  But Grace Potter & the Nocturnals is proving me wrong and I’m so glad.  I first wrote about this band back in December (see December 22, 2010 post) after seeing their “Paris” video at 8 a.m. while getting ready for work.  I remember hearing a growling voice and a screaming guitar riff and running to the TV to see what the hell was going on.  I think I was equally dumfounded by how good this sound was and in shock that VH1 was actually playing videos! Anyway, as I watched the video with my jaw on the floor I thought to myself, “Holy shit this band is bringing back rock & roll!”

In February I saw them at a small theatre in Denver called the Ogden which was so extremely sold out we were standing shoulder to shoulder.  Potter came out in a short, sequined Tina Turner-type dress and proceeded to jump around, wail on her guitar, stomp her stilettos while playing the piano and jangle her tambourine like her life depended on it.  Last night was no different except she was in a fringe dress that I want to steal and wear to every event I go to for the next year.

Last night was packed but not sold out and that’s most likely because the band had spent the previous two nights killing it at Red Rocks.  (Ask Holly and Katie- they were there!) When I got the email a few months ago that Grace Potter & the Nocturnals were playing at the Ogden again I was shocked – after that initial show I thought for sure that by the time the band returned to Denver they would be too big for the small venues. Turns out they are that big but they still wanted to add a small venue to their weekend Denver tour – gotta love that.

Just like in February the band came out guns blazing with Potter leading the charge.  She is a performer, an entertainer, a front woman and a force.  But that’s not all.  Her band is incredible – like Potter they look like they stepped off a seventies album cover and the best part is that they sound like it too.  Five extremely talented musicians who are having so much fun it’s impossible to look away.  Seriously- you don’t even want to go to the bar for a drink because you’re afraid you might miss something.  The band has never-ending energy and it makes the crowd so excited to be there because the people they paid to see are excited to be there.  Rather than looking glazed over and hung over, the band has huge smiles on their faces as they wield their guitars, pound on their drums and bang on the piano.  And this goes on for two hours straight.

Since summer is definitely what I would consider “concert season” there are a ton of acts who hit the road to visit various venues across the country and the world.  Big, small, arena, dive, amphitheater, indoor or outdoor, bands are on the road and people are buying tickets.  I know times are tough and that Ticketmaster is making buying tickets similar to getting a root canal but if Grace Potter & the Nocturnals come to your town go see them.  I personally guarantee that you will not be disappointed.  This band is making new music great again and is doing its part to save rock & roll.  Help them out and buy a ticket.  They are without a doubt the best live act on tour this summer.  And probably will be for a very long time.