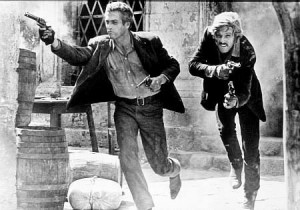 After talking about it for months and knowing for sure it was going to win an Oscar for Best Picture, I finally saw The King’s Speech.  Everyone I talked to who had already seen Speech said it was definitely the best movie they had seen in a long time so I was really looking forward to it.  Although I really did enjoy the movie there were part of it that dragged – but the best parts of the movie were without a doubt the scenes in which Colin Firth (King George VI aka Bertie who stammers) and Geoffrey Rush (Lionel Logue, his speech therapist) were interacting.   The two of them were entertaining, genuine and really fun to watch.  What begins as an awkward meeting (on Bertie’s part) turns into a very cool friendship that lasts the rest of their lives.   This friendship reminded me a few other “buddy films” that are nothing short of classic:

Shawshank Redemption – The companionship between Andy and Red is giving me chills as I write this.  If the two of them hadn’t met in prison they would have never crossed paths but the mutual respect and camaraderie between them is uplifting even in the worst situations.

Andy Dufresne: If they ever try to trace any of those accounts, they’re gonna end up chasing a figment of my imagination.

Red: Well, I’ll be damned. Did I say you were good? Shit, you’re a Rembrandt!

Andy Dufresne: Yeah. The funny thing is – on the outside, I was an honest man, straight as an arrow. I had to come to prison to be a crook.

Butch Cassidy & The Sundance Kid – One of my favorite westerns of all time about two buddies who rob banks and end up fleeing to Bolivia when the law gets too close.  Paul Newman and Robert Redford are hilarious as their banter reminds me of an old married couple – who carry six shooters.

Butch Cassidy: Well, the way I figure it, we can either fight or give. If we give, we go to jail.

Sundance Kid: I’ve been there already.

Thelma & Louise – Two badass bitches hit the road in a 1966 Thunderbird after shooting a rapist.  Wearing shirts with cut sleeves and cowboy boots, they spend most of the movie running from the law and never looking back.  (It also helps that this movie features Brad Pitt’s debut as the hottest young southern male to ever wear a cowboy hat).

Thelma: Hey Louise, better slow down, I’ll just die if we get caught over a speeding ticket.  Are you sure we should be driving like this, I mean in broad daylight and everything?

Louise: No we shouldn’t, but I want to put some distance between us and the SCENE OF OUR LAST GOD DAMNED CRIME!

Wedding Crashers – One of the funniest comedies of the last decade, this movie features Vince Vaughn and Owen Wilson at their best playing best friends (Jeremy and John) who crash weddings. Very charismatic and always the life of the party, these guys are the epitome of buddies with their back and forth repartee that consists of delivering ubiquitous lines like “You lock it up!”

Jeremy: Have you even shot one of these things before?

John: The whole 17 years we’ve known each other I’ve been sneaking off to go on little hunting trips around the world. No, I don’t even know what the fuck a quail is!