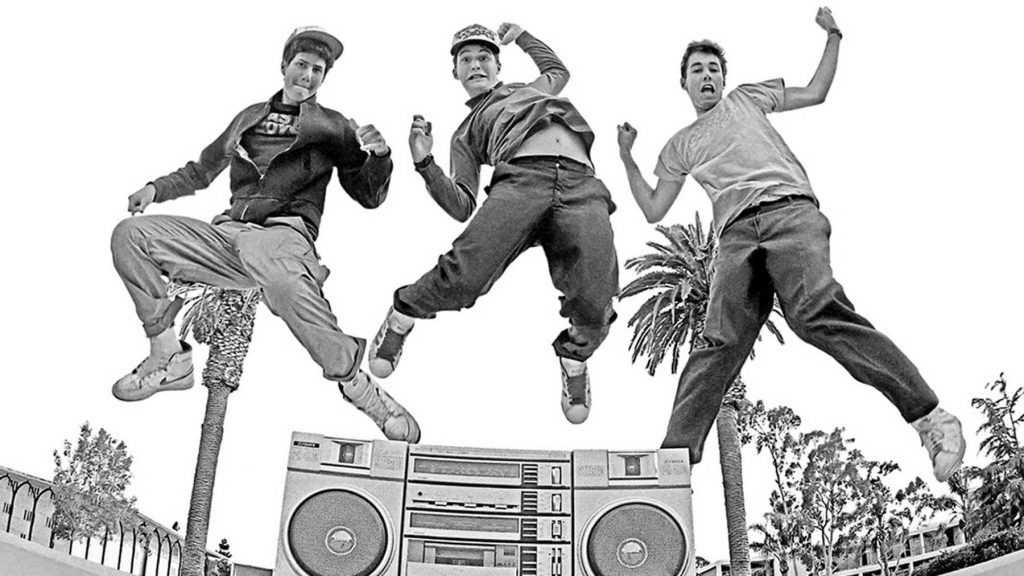 When I sat down to watch the Beastie Boys Story on Apple TV+ (the app that appeared on my computer a few months ago), I wasn’t expecting a “live documentary experience.” Directed by Spike Jonze, the documentary features Michael “Mike D” Diamond and Adam “Ad Rock” Horovitz in front of a live audience at the Kings Theater in Brooklyn. Also described as a “staged storytelling hosted by Diamond and Horvitz,” Beastie Boys Story showcases an odd but creative format. Watching the two remaining band members (Adam “MCA” Yauch tragically passed away in 2012) talk about their 30-year history on a stage in front of an enormous screen is innovative but also a little strange. Is this a stand-up act, a live performance, or Beastie Boys 101? That being said, they are clearly seasoned performers and it’s amazing how many photos and how much footage they have. It’s as if these guys had a point and shoot camera or camcorder with them at all times which, as most of us know, was a huge pain in the ass in the 80s and 90s.

But the Beastie Boys didn’t make their mark on music by doing what everyone else was doing. They were an exceptional band because they weren’t afraid to break new ground, introduce a unique method of sampling, and blend both hip-hop and rock in an era when no one had even thought to do it. Although I’ve been a fan for over 20 years, I learned a lot from the documentary – especially about their humble beginnings. For example, I had no idea that the original band included girls and that “Beastie” is an acronym for “Boys Entertaining Anarchistic States Towards Inner Excellence.” I knew that the band met Rick Rubin when he was a student at NYU, that Rubin and Russell Simmons founded Def Jam together, and that the Beasties were signed to Def Jam. But I didn’t realize that, following just one album (Licensed to Ill), they moved on to Capitol Records.

Throughout the two hours, Diamond and Horovitz break down the Beastie Boys history into chapters which isn’t completely necessary but probably made it easier for them to speak in front of the crowd and move the narrative along. I love how they describe the history of their sound – which was punk – and how their sound evolved over time to include rock and hip-hop. Even though I was aware of that information, it was fascinating to hear and see the timeline. Also, it was an interesting reminder about how young they were when they started. Diamond is now 55 years old, Horovitz is 54, and Yauch was 47 when he passed away which means that they were in their twenties when they recorded the first half of their catalog: Licensed to Ill, Paul’s Boutique, Check Your Head, and Ill Communication.

As they are now considered “middle-aged,” Diamond and Horovitz own up to some mistakes they made along the way such as the ridiculous lyrics to “Girls” and accidentally becoming the assholes they were parodying in “Fight For Your Right.” Apparently, that song became their Achilles heel – I had no idea. I appreciate them acknowledging their missteps, and taking responsibility for them, but also reminding the audience that they were kids at the time. They’ve been friends and making music since they were teenagers and it shows. They are also able to finish each other’s sentences and laugh at their younger selves.

While the Beastie Boys definitely changed the game with their samples and melding of genres, at their core, they were musicians. They could simultaneously rap and play instruments and they wrote their own lyrics. The band also loved sampling Zeppelin which is probably what drew me to the band in the first place. All three members were creative, unafraid to try new things, and had a sense of humor that, as they explain in the documentary, sometimes helped and sometimes held them back.

Throughout their Story, Horovitz and Diamond repeatedly pay homage to Yauch – in fact, he is credited for being the founder of the Beastie Boys. At one point, although the two of them are visibly having a tough time talking about Yauch passing away and playing the final gig they didn’t know would be the final gig, they mention the different types of friends that exist. They point out that there are friends you see occasionally and friends you talk on the phone with all the time. And then there is the friend who is a motivator. Who says “we should do ____” and actually makes it happen. That’s who Yauch was and they miss him.

Beastie fans and music history fans will love the documentary as it functions as a reminder that a lot of what we see and hear in music today was pioneered by this band. Be sure to continue watching after the credits roll. You do not want to miss the star-studded commentary.