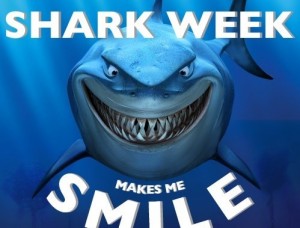 It’s that time of the year again! Discovery Channel’s most anticipated seven days of the year is going on right now: Shark Week! An annual, week-long event that has been going on since July 1987, Shark Week was originally created to raise awareness and respect for sharks. Over the years that initial intent has changed a little bit as Discovery Channel has put entertainment before education. In fact, the show has become so popular that the Discovery Channel’s website homepage bills it as “the most wonderful week of the year.”

Since 2010, Shark Week has been the longest-running cable television programming event in history and is now shown in 72 countries. In 2014, 40 million people tuned in and the Discovery Channel is expecting similar numbers this year. Tonight the following “episodes” will premiere: “Return of the Great White Serial Killer,” “Alien Sharks: Close Encounters,” “Glow-in-the-Dark Sharks” and “Shark After Dark.” Tomorrow and Wednesday viewers will be treated to episodes including “Bride of Jaws,” “Super Predator” and “Ninja Sharks.” That sounds like some pretty blatant agenda pushing so it’s not surprising to hear that Discovery Channel is dealing with criticism for airing programming that is designed to attract viewers for all the wrong reasons. Titles that portray sharks as the enemy or paint an inflated picture of the dangers of sharks didn’t used to be the point and fake documentaries aren’t exactly giving the public an accurate portrayal of a creature that has fascinated generation after generation.

Obviously Discovery Channel wants and needs to make money and reality television is probably their most profitable sector. As a result, shows like Deadliest Catch and Dirty Jobs, which have educational components but also tells a story through relatable characters, garner the most viewers. Since Shark Week happens once a year and the public has an undeniable fascination with sharks, Discovery Channel has had to get creative. And this shift has led to dramatic and fictitious programming called “docufiction.” That term is hilarious because the only aspect of it that falls into the documentary category is the format – not the content. By definition a documentary is “a movie or a television or radio program that provides a factual record or report” so at best these dramatic little shark episodes should be called fauxmentaries.

So what’s the appeal of Shark Week and sharks in general? Have we seen Jaws too many times or is it because sharks, unlike whales or dolphins, aren’t as prevalent at places like SeaWorld in San Diego, Orlando and San Antonio or the Miami Seaquarium? In an effort to keep the reputation of sharks in check, advocates are constantly publishing facts that keep them in perspective. Here are five examples from National Geographic:

-You have a one in 63 chance of dying from the flu and a one in 11 million chance of being killed by a shark during your lifetime.

Because Shark Week has become more entertainment-oriented, Discovery Channel has been criticized by people in the science field for creating bogus stories and misleading experts into thinking their interviews were being used for legitimate programming. I’m not sure how Discovery Channel pulled stunts like that without getting sued because those types of moves insult the journalistic integrity of both the program and the channel. Probably realizing they were pushing the legitimacy limit, the network hired Rich Ross, the former Chairman of Walt Disney Studios, as President of Discovery Channel and Science Channel in January 2015. He immediately discussed making changes and announced that he would be hiring senior level executives to oversee documentaries, specials and scripted programming. He also said he would remove the so-called “docufiction” from future Shark Week lineups which means that by week’s end we’ll know the real reach of Ross.