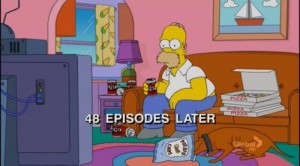 Although the FXX Network technically launched on September 2, 2013, I think it actually launched last Thursday when the network premiered The Simpsons marathon. We are right in the middle of the 12-day, 552-episode marathon and it has everyone talking. Social media is out of control with photos of people’s televisions that feature their favorite episode, scene or character. Never have I seen so many couch photos on Facebook!

It’s interesting how many people relate to The Simpsons even after all this time. Maybe it’s because the characters never age or maybe it’s the writing as the show has always kept up with what’s going on in the real world. All of this contributes to the show’s legacy and longevity – it’s been on the air for a quarter of a century and is still relevant! If that’s not impressive I don’t know what is!

Most importantly, The Simpsons is not afraid to call out anyone and everyone via its subtle references and brilliantly-written dialogue that either high-fives or talks smack about whoever they want. Which is why it makes sense that FXX paid such a pretty penny for the rights to the show – $750 million bought them the broadcast syndication rights which broke the record for the largest off-network deal in television history.

In case you were wondering how much The Simpsons is worth – now you know! And the show isn’t over. On September 28, The Simpsons will begin its 26th season with the premiere episode that promises a the death of a major character. The same day, the long-anticipated Simpsons/Family Guy crossover episode airs to kick off Family Guy’s 13th season.

So keep on watching Simpsons fans! According to the FXX schedule, the rest of today’s episodes cover season 12 which was 2000-2001. Enjoy and remember to get up and stretch!