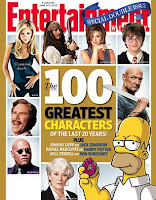 Entertainment Weekly’s latest edition features a list called “The 100 Greatest Characters Of The Last 20 Years” so of course, being the list person that I am, I had to write about it. What’s interesting about compiling a list of characters is that it shows how much fictional people affect our lives. This is a list of characters; not actors, musicians or writers. These people are not real, yet they left such an impact that they could not be ignored.

As I’ve mentioned before, making lists opens the door for criticisms and complaints because no one will ever completely agree with you. Although I thought EW compiled a pretty good list (and some of their choices are definitely on my list) I’ve decided to make one of my own, but only of the Top 20 Characters because 100 is WAY too ambitious and time consuming. To be fair I will give both lists: EW’s Top 20 Characters Of The Last 20 Years and mine. Let me know what you think.

1) Forrest Gump – Tom Hanks exemplifies that the phrase “Don’t judge a book by its cover” is no cliché. Call it luck or call it genius but either way Forrest Gump changed the lives of more people than he realized.

2) Jerry Maguire – Tom Cruise should have won an Academy Award for his performance as a high-powered agent who trades all his power for a soul.

3) Ari Gold (Entourage) – Inappropriate, the negation of P.C. and funny as hell, Jeremy Piven kills it as a ruthless agent who will do anything for his clients.

4) Will Hunting (Good Will Hunting) – Angry, beaten and misunderstood. With the help of Robin Williams, Matt Damon (in his debut) plays it brilliantly.

5) Ellis Boyd “Red” Redding (Shawshank Redemption) – Although we meet Morgan Freeman’s convict in jail, he is the epitome of what is means to be a best friend. (Also, see: Carly Brown)

6) William Miller (Almost Famous) – Patrick Fugit plays a young writer who is based on Cameron Crowe and his experience writing for Rolling Stone magazine. He is a teen who is along for the rock and roll lifestyle ride and ends up doing and seeing way more than he bargained for.

7) Jules Winnfield (Pulp Fiction) – One quick conversation says it all:

Jules: I want you to go in that bag, and find my wallet.
Pumpkin: Which one is it?
Jules: It’s the one that says Bad Motherfucker.

8) Keyser Soze (Usual Suspects) –Never has there ever been a more tangled web of lies as the one Kevin Spacey spins in this classic. No one saw it coming and then all the sudden the man in question disappears. Amazing.

9) Hank Moody (Californication) – David Duchovny kicks ass as a writer who has more addictions than common sense while showing that charisma and talent might just conquer all.

10) Sawyer (LOST) – Josh Holloway’s Sawyer starts off as an angry man living his life for revenge but turns into a person we can relate to regardless of the fact that his favorite phrase is “Son of a bitch!”

11) Angela Chase (My So-Called Life) – Never has there ever been a more accurate and gritty portrayal of what it means to be a high school teen. The dialogue, the acting and the storylines are a force to be reckoned with.

13) Carrie Bradshaw (Sex and the City) – Although she can be self-centered at times, SJP brings humanity, comedy, fashion and writing chops to a ground-breaking show that pushed the boundaries of both television and clothes.

14) Vivian Ward (Pretty Woman) – Julia Roberts shows us that hookin’ ain’t easy but driving a Lotus is in this very clever spin on the overplayed rags to riches story.

15) Tony Stark (Iron Man) – Obnoxious, charismatic and brilliant are a dangerous but fruitful combination for Robert Downey Jr.’s Tony Stark. He is too smart for his own good but that fact is also saving the human race.

16) Dr. Greg House (House) – The phrase “doctors without borders” doesn’t even begin to describe Hugh Laurie’s addict/genius/handicapped character. He does whatever it takes to make sure to a) solve the medical puzzle and b) save the patient. In that order.

17) Captain Jack Sparrow (Pirates of the Caribbean) – Johnny Depp shows his range is a good as his looks with his hysterical and believable turn as a pirate who may or may not be drunk, a rock and roll front man and the most clever pirate in history.

18) John J. Dunbar (Dances With Wolves) – While adapting to a culture on the other side of his spectrum, Kevin Costner pulls off an Oscar-winning performance as a lieutenant who breaks on through to the other side.

19) Dylan McKay (90210) – Probably the blueprint for Gossip Girl’s Chuck Bass, Dylan McKay went to rehab before he could drive and was forever haunted by his father’s death. Luke Perry fuses James Dean looks with a character that can definitely be described as a rebel with a cause.

20) Chuck Bass (Gossip Girl) – Dark, angry, rich and troubled, Ed Westwick’s Chuck Bass is the ultimate bad boy/rich boy who makes no apologies for being exactly who he is regardless if he’s wearing plaid pants or not.