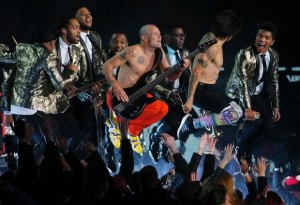 Although I am clearly more of a classic rock fan than a pop music fan, Bruno Mars put on a better show during last night’s Super Bowl than The Rolling Stones in 2006, The Who in 2010 and Madonna in 2012. And the Red Hot Chili Peppers were the punk rock icing on the cake.

Mars and his sequined blazer-wearing band lit up the stage in more ways than one. Not only did they all sound good and look good, they commanded the attention of every person on the field and watching at home. Channeling James Brown, Prince, Sinatra and the Temptations, Mars is definitely an entertainer. And, unlike some of his predecessors who fall into the “entertainer” category, he can actually sing.

I’m glad that the Chili Peppers were also on the bill because the seamless transition from “Runaway Baby” to “Give It Away” proved that multiple genres and generations can actually put on a halftime show. The powers that be tried this in 2013 with Madonna, LMFAO, Nicki Minaj, M.I.A. and Cee Lo Green but it was a disaster. This time, it felt like Mars and the Chili Peppers had been playing together for years. Even Flea and Mars’s band were jumping around together as they shredded their guitars. It was something to see.

Hopefully all the people who were worried about Mars handling himself in front of 100 million viewers have shut their mouths. He may be young (28) but Mars made that stage his own and with the help of extraordinary frontman Anthony Kiedis (who doesn’t age) they put on a show that will not be forgotten.