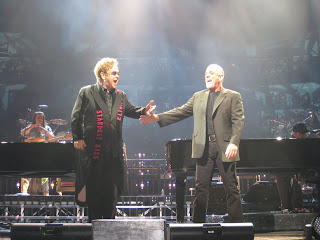 After seeing two of the biggest guns in music’s arsenal showing off their dueling piano skills I must say that Elton John and Billy Joel, clocking in at 62 and 60 years old respectively, haven’t lost their touch.

The show began with two pianos rising from under the stage and the entrance of both Elton and Billy together. To say that they were well-received by the sold out crowd at Pepsi Center is the understatement of the year. I think a lot of the audience was actually star struck by these two musical powerhouses who probably stand no taller than 5’ 5” each. Oh well….their piano playing and singing more than compensate.

“Your Song” kicked off the show and the two of them played together for a few more tunes. Then it was time for the Elton show as Billy made his way off stage. Elton, starting off his solo show in purple sunglasses, played the crowd-pleasers including “Tiny Dancer,” “Saturday Night’s Alright” and “Rocket Man.” He even gave a happy birthday shout out to fellow musician James “You’re Beautiful” Blunt who apparently was in the building. Every time Elton finished a song he would stand up, take a bow and then as the person responsible for me attending this event, Carly Brown, so eloquently put it, “he would put one foot up on the piano and his hands on his hips like Captain Morgan!”

After Elton finished his solo set, a very chatty Billy Joel came out to greet the audience. Part musical act, part comedy act, Billy was quite the entertainer. His set was not as hits-decorated as he played Carly Brown favorite “Allentown” and B-side song “Zanzibar” but he did play “She’s Always A Woman” and then jumped on guitar for an rockin’ rendition of “We Didn’t Start The Fire.” While I was disappointed not to hear my two favorite Billy songs, “Big Shot” and “She’s Got A Way” I was blown away by how good he really is.

After Billy’s solo set Elton came back onstage wearing red sunglasses and a sparkly “Rocket Man” jacket that, given the chance, both Carly and I would have stolen and wore to work the next day. The two piano legends ended the show like they started it, playing together like they co-wrote each other’s songs. The last few gems included “Bennie And The Jets,” “Candle In The Wind” and of course, “Piano Man.”

By the end of the show Elton had gone through at least two wardrobe changes while Billy had played three instruments including my all-time favorite, the harmonica. Impressive but not surprising for two guys who have been banging on pianos most of their lives – one of which who has sold more than 250 million records (Elton) and the other who is the sixth best-selling recording artist and the third best-selling solo artist in the United States (Billy). Take that James Blunt!