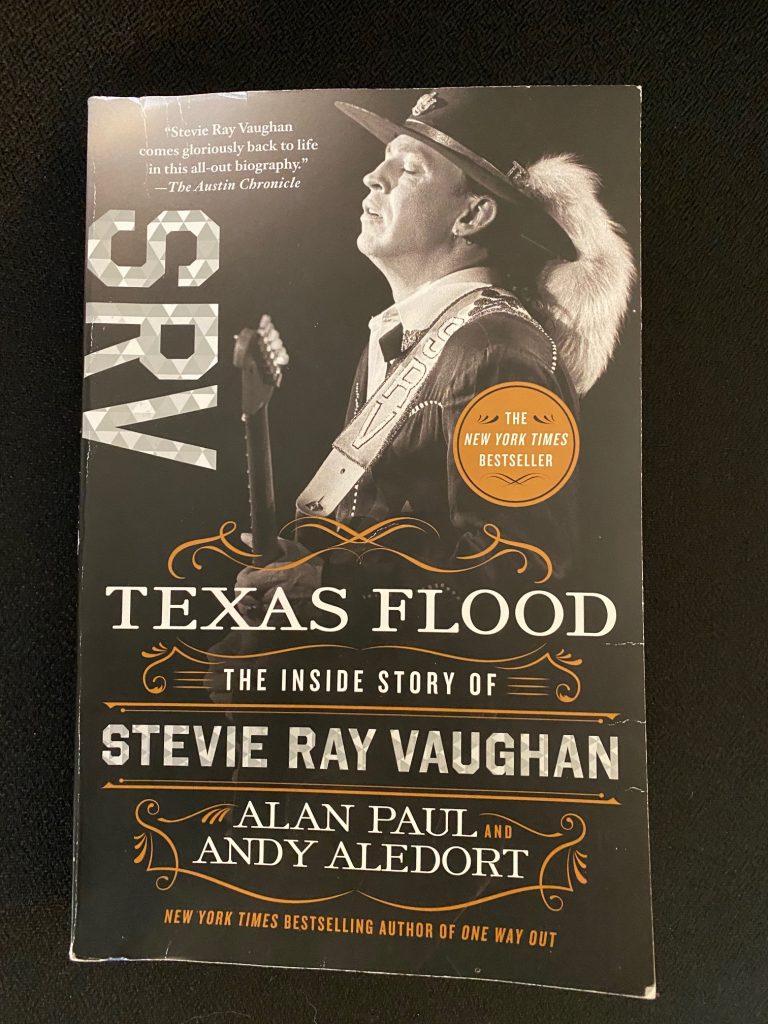 Written mostly as an oral history through quotes, anecdotes, and stories from the people who knew Stevie Ray Vaughan best, Texas Flood is a first and secondhand account of the guitarist’s life. The details about the intricacies of Vaughan’s life as a person and an artist are captivating and heartbreaking because they are told through the memories of those who were there to witness his greatness, downfall, redemption, and tragic end.

Any book or movie that can pull off suspense even when the reader or viewer knows what happened is a feat in and of itself, and authors Alan Paul and Andy Aledort do just that. Not only are they excellent writers, they are also fellow musicians and, unquestionably, huge fans of Vaughan. That being said, when the writers are also fans it definitely shows – which is both positive and negative. While the book is clearly well-researched, some of it becomes a bit repetitive. There’s a difference between providing necessary evidence/examples and driving the point home too hard.

Each chapter starts with a few paragraphs of writing and then goes into telling the story through the words of others and I found myself wanting more writing from the authors. In some chapters the anecdotes are fascinating and exciting, but in others it seems like Paul and Aledort are pushing the Cast of Characters – which is made up of approximately 100 people – to get a few main themes across:

While the book is a linear account of his life – starting at the beginning in Texas where Vaughan was born – minimal specifics about his parents are divulged. There are sporadic comments about Vaughan’s difficult childhood but very few details are provided. That being said, it’s clear that his mean (and possibly abusive) father led to Vaughan drinking and taking drugs starting at an early age which would define most of his short life. He is quoted saying, “If I did have feelings, it must have been my fault, ’cause that’s what I heard when fights were going on.”

Most of the discussion about family centers around his older brother Jimmie who started out as the most famous and best guitar player in Texas. Vaughan followed his lead. But his brother didn’t want to stray from the blues and Vaughan was willing to add rock elements to his sound. Even though he could never read music, his first public appearance was at age 10. Says Vaughan, “Jimmie taught me how to listen so I could teach myself.”

People always focus on Club 27 – Hendrix, Janis Joplin, Jim Morrison, etc. – but the tragic loss of Stevie Ray Vaughan in a helicopter crash is unbelievably heartbreaking. He had accomplished a great deal at that point but, at 35 years old, was also just getting started. After saving himself through sobriety, he’s quoted as saying he was playing on borrowed time which is self-aware and eerie at the same time.

“Stevie was a sheer force of desire, seemingly incapable of giving anything less than 100 percent every time he picked up the guitar.”

“His impact has been felt across every age bracket in every corner of the globe. He remains a true guitar legend and a guitar hero.”

“I knew he was for real, that he was a seeker, a warrior.”

“You could feel Stevie from the back of the club before he played a note.”

“Stevie was a phenomenon. When you see a blazing meteor, you don’t argue with it.”

“His home was his guitar.”

“Stevie had this element of badassery. He carried a lot of anger but…you could see a beautiful heart struggling.”

“He was a true artist and a tough, disciplined guy, which you have to be to get that good.”

One person in the book mentions that Vaughan changed the direction of the blues. No truer words. He was determined to create his own sound while integrating the sound of his heroes. The ability to do something new while still maintaining the originality of the genre is what made him great. After reading the book, I watched a few videos of his live performances and, of course, was blown away. Watching how quickly and effortlessly his hands moved across a guitar is insane.

Steve Jordan, who was a drummer for Clapton, Keith Richards, and the Blues Brothers, among others, makes an excellent point: “Stevie and Eddie Van Halen are very similar. They both carry the rhythm, melody, and lead and drive the band with the way they play the guitar.” I never thought about comparing Vaughan and Van Halen but I love that parallel.

As I am sure Van Halen was described over his decades of guitar playing, in the book Vaughan is described as a “super talented guy playing with aggression and soul” whose guitar playing “was like a freight train.” People like that come around once or twice in a lifetime so it’s no surprise that Bonnie Raitt, a legendary blues musician in her own right, says that Vaughan “played as if his life depended on it, and it did.”

In the Epilogue, Jimmie Vaughan mentions that his brother’s guitar took him around the world and gave him an identity. He finishes by saying: “I’m still amazed at the impact Stevie had and is still having to this day. I believe it’s because of the purity and simplicity of his message: find out what you love, and do it.” What else is there?