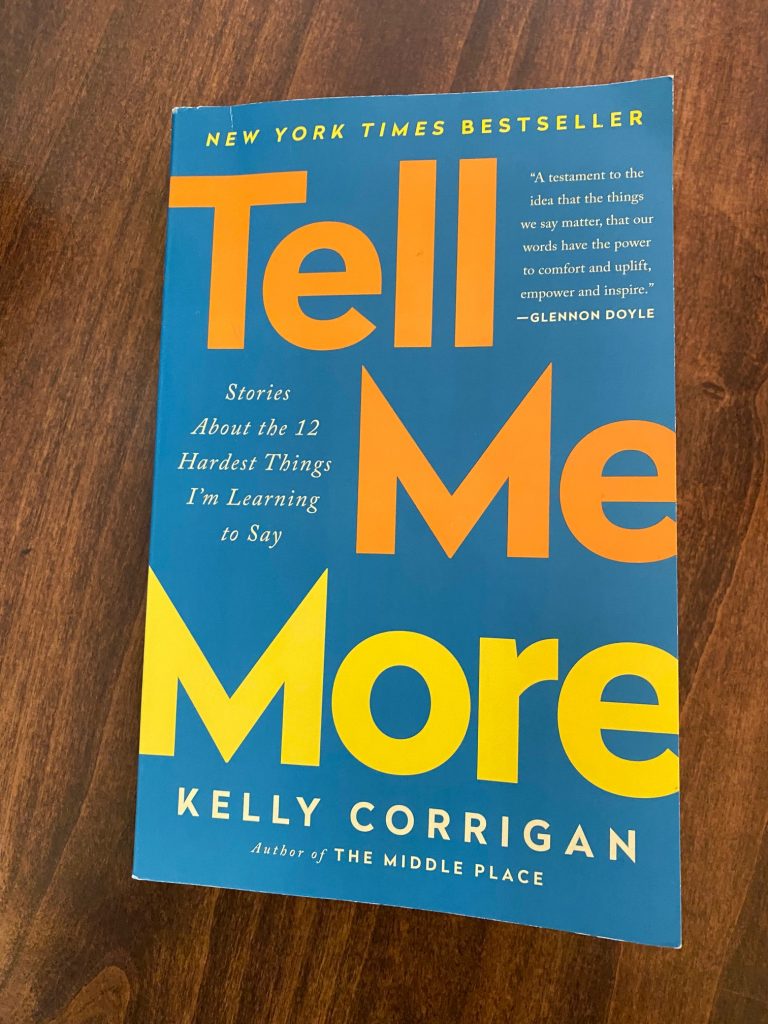 This book is tough. It’s good but tough because there is so much aching sadness that anchors the narrative. In the dedication, author Kelly Corrigan blatantly states that since she wrote her last book, she’s been to two funerals – one for her dear friend and one for her dad. And that sets the tone for Tell Me More: Stories About the 12 Hardest Things I’m Learning to Say.

I want to be clear that this book is incredibly brave and well-written. Corrigan digs deep in terms of self-awareness and reflection and is able to talk about herself and her family with a certain type of candidness that writers only use with permission. I can relate.

Divided into 12 chapters, each of them titled with a word or phrase that she is learning to say, Corrigan demonstrates how and why she is learning to say these things. By using “learning to say” rather than “learned to say” she is showing that she is a work in progress and I appreciate that. My favorite sections are “Tell Me More” (because she highlights the importance of people asking other people questions), “I Don’t Know” (in which she namechecks Fast Times at Ridgemont High), “No” (in which Corrigan shows that, while some people think no is a four-letter word, she does not), and “Onward” (because of the “embrace the idiosyncrasies” part).

The last chapter is unequivocally the hardest (and also one of the best) because she sums up all the craziness of the family she was born into and the one she has created for herself in a way that is raw, introspective, honest, loving, and real. “What I was starting to see was, for me, the real gig that mattered: parenthood.” Corrigan goes on to say: “I knew that the coolest thing about the coolest people I knew was that they had made real families…Our chance to be great for someone.” She put me in tears with that statement because it’s exactly how I feel. And then she hits home again in the Author’s Note when she says, “Reality always comes dressed in a point of view, try as we might to lay it bare.”

While most of Corrigan’s words of wisdom are interesting, relatable, and funny, some of her examples get repetitive and/or go on way too long. Do I need to know that her dog drinks from the toilet because she didn’t bother to do any training and therefore the dog eats whatever might have been left in the toilet? No – because there is a fine line between keeping it real and too much information. But her spot-on descriptions of parent/child, family, and spouse dynamics make Tell Me More worth the read.

“We’d really be in trouble if we gave up on change, on the potential for growth.”

“Accepting things as they are is difficult. A lot of people go to war with reality.”

“Makes you wonder what else people might tell you if you just keeping asking questions.”

Rather than saying “I’m sorry”: “We can be damaged and heavy-hearted but still buoyant and insightful, essential and useful, just by saying I know.”

“Sexually, professionally, and personally, saying no takes balls. One friend told me her one big takeaway from three years and $11,000 in therapy was Learn to say no. And when you do, don’t complain and don’t explain. Every excuse you make is like an invitation to ask you again in a different way.”

“It must be possible to say no nicely and still be loved.”

“What took me much longer to understand is that to love someone is to love the people they love, or at least, try.”

“Someone important believes in us, loudly and with conviction against all substantiation, and over time, we begin to believe too.”

On the people who use the word well: “Those people, post-emotion, would punctuate the conversation with move-along words like well. I hated well, the way it lured the word anyway to the lips.”