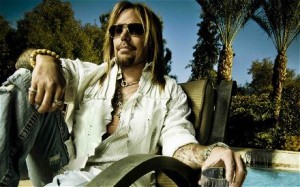 No, that’s not a two-item list of debauchery beginning with the letter “T.”  It’s the title of Motley Crue lead singer Vince Neil’s new book and like his band’s reputation, it doesn’t hold back.  Released as a literary accompaniment to his new album of the same name, Tattoos & Tequila is Neil’s tell-all book of the life and times of one of rock and roll’s most decadent and infamous lead singers.

Although Motley Crue originally told their story in the New York Times best seller The Dirt, the book was written by all four band members with the help of Neil Strauss, not just one specific band member.  As far as The Dirt goes, there is a reason why that book was a New York Times best seller – it was that good.  I remember buying it one day and being unable able to put it down until I finished it – and it wasn’t short.  Apparently telling the story of four self-destructive musicians who defined the decade of decadence took a few hundred pages.  No problem – I literally couldn’t put it down.

My point is that if you are a Motley Crue fan and already read The Dirt, you should still read Tattoos & Tequila because like the cover says, it really does bring you “to hell and back with one of rock’s most notorious front men.”   While Neil clearly had his choice of women, booze and drugs for most of his life he also dealt with killing a good friend and injuring two strangers in a drunk driving accident and watching his four-year-old daughter die of cancer.  He also has gone to rehab more times than he can count and is on his fourth wife.  For all the success, fame and decadence there were some serious consequences that Neil faced.

While many people roll their eyes at me when I tell them how much I like Motley Crue there is something to be said about a lead singer who looked and sounded like a girl but still put off this macho, badass image while hitting the high notes, a drummer who was as lawless as he was talented, a bass guitarist who was a tortured writer and severe drug addict and a lead guitarist who has pretty much suffered from chronic pain for as long as he can remember.  They all came together and put out some seriously amazing rock and roll records.  If you’re not a Motley Crue fan try to put aside the 80s hairband stereotype and listen to songs like “Kickstart My Heart,” “Dr. Feelgood” and “Too Fast For Love.”  It’s good stuff and regardless of the haters who shun Motley Crue for being cock rock or glam rock or whatever – those guys can play their instruments and Vince Neil can sing.

Tattoos & Tequila begins with an intro by co-author Mike Sager and here are a few of my favorite quotes where he describes Vince Neil:

“Androgynous sex symbol during the early years of the gender-bending eighties.”

“The 1987 Aerosmith classic, ‘Dude Looks Like A Lady,’ was written after Steven Tyler and Joe Perry spotted Vince in a bar and mistook him for a hot chick.”

“Vince was an aggressive, over-the-top frontman.  That band was just so aggressive…they thought they were above the law.”

“They just went out there and turned it on.  There was no dimmer switch.  It was awesome.”

“They just took no prisoners”

In August 1985, Theatre of Pain hit number six on the charts, the highest of their albums.

In May 1987, “Girls, Girls, Girls” peaked at number 12 on the US charts, the highest placing yet for any Motley Crue single.

The album of the same name soon followed – entered the Billboard 200 at number five, the highest positioning of a metal album since Led Zeppelin’s The Song Remains The Same, almost a decade earlier.

“Motley Crue: We started something great.  But we also created a monster.”