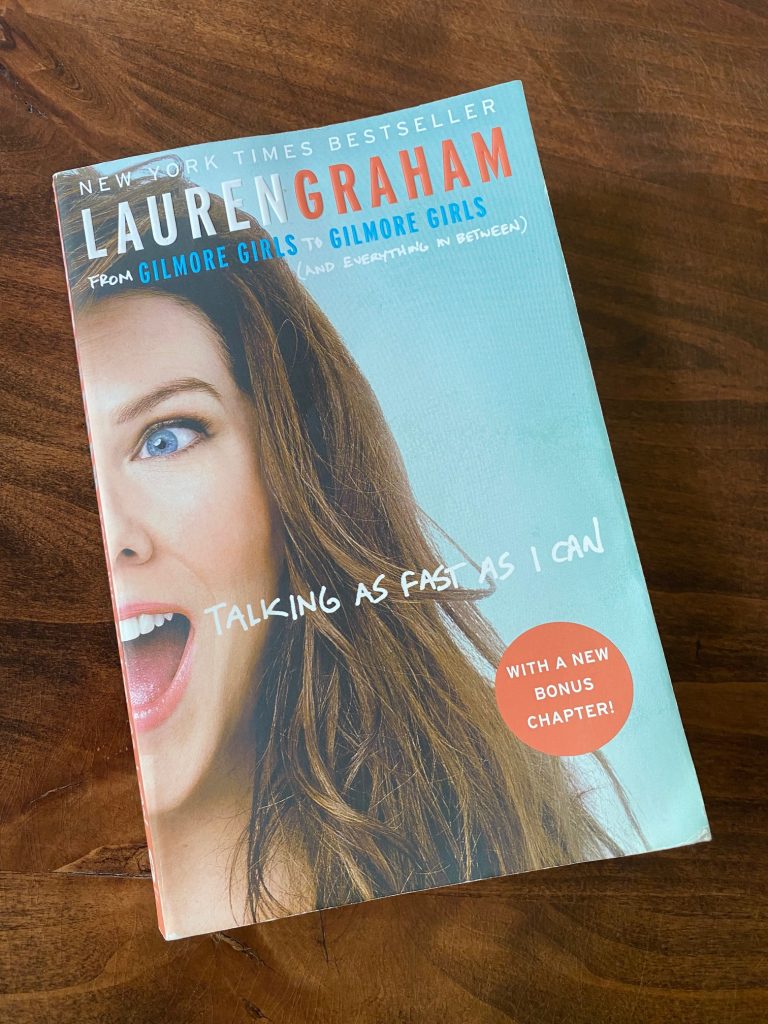 Lauren Graham’s book is written exactly how I thought it would be written: her talking a mile a minute and inserting jokes (most funny, a few eye-roll-inducing) for the entire 227 pages. But that’s not a bad thing. As expected, her writing is as witty as the characters she has played, and she writes just like she talks. On page 44, Graham describes herself as being the “I’m kind of winging it here, but isn’t it fun?” type of person. Clearly she knows herself.

Starting with her childhood, the book’s linear format discusses family, skipping kindergarten, going to college, waitressing between auditions, and the ups and downs of becoming a professional actor. Graham is observant but also flighty. She breaks down every season of Gilmore Girls (the original series followed by her time filming the reboot) but only devotes one chapter (five pages) to Parenthood. I don’t get it. Although most people probably know her best from Gilmore Girls, she was excellent in Parenthood and she says it was the best job she ever had so why not spend more time discussing it?

While the chapter about being a guest judge on Project Runway is fun, the bit about the character she invented, Old Lady Jackson, goes on way too long. If Graham was a former SNL cast member I could understand going into all those details, but this chapter is a waste of 10 pages. Old Lady Jackson is not nearly as funny as Graham thinks (hopes?) making the whole thing completely unnecessary. I do think it’s interesting that she neglects to mention her award nominations: Screen Actors Guild, Golden Globe, and Satellite Award for her work on Gilmore Girls. All of that is a huge deal and she never brings it up.

“I hadn’t had material this dense since back in acting school.”

“Note how over the course of this year [season 2], the pace of the show increased exponentially, and everyone began talking a whole lot faster.”

“[Gilmore Girls creator Amy Sherman-Palladino] is the master of moments that are heartbreakingly funny.”

In between the unnecessary chatter that usually involves (gratuitously) addressing the reader, Graham offers some excellent points, observations, and revelations:

“Whether it’s on your own or through someone else, it’s wonderful to be introduced to something you didn’t realize you needed.”

“There’s more comedy in failure than in success, and it’s a much more universal language.”

“In between takes, [celebrity chef Roy Choi] discusses the similarities between being a real chef and acting, noting that both professions require individual precision while maintaining an awareness of the whole.”

“I’ve learned that being a professional actor without a clear next step in sight is another one of those moments to remind yourself that a train is coming, just not on your time frame.”

“Eventually I learned that, in the beginning at least, it was better for me to be finished than to try to be perfect.”

“I realized that the practice of writing the book had actually, slowly and over time, made me a better writer.”

The fact that Graham has published three books with a fourth book due in November is impressive. Her insight on what it was like writing her first book (Someday, Someday, Maybe) and Talking are definitely highlights for me for obvious reasons. Not every actor can write, not every writer can act (I sure as hell can’t) so being able to do both is definitely an achievement.

My best friend is the biggest Gilmore Girls fan I know so I’ll be purchasing Graham’s Have I Told You This Already? for her in November. We’ll see how fast Graham talks through that one.