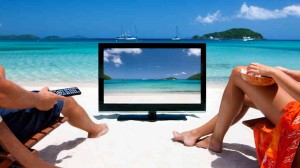 The quality of summertime television, no matter how hard they push the PR campaign, is always a tossup because you never know what you’re going to get. While the regular season shows are on hiatus, there are some shows that are exciting enough to survive when people are on vacation and out of school.

Here are three shows that are causing more heat than the summer temperatures:

Ballers – On location in my hometown of Miami, Ballers is about former University of Miami and Miami Dolphins player Spencer Strasmore and the lives of NFL players after football. Starring Dwayne “The Rock” Johnson (who really did play for UM) as Strasmore, the show features a large cast of people involved in the football industry including agents, coaches, financial advisers, significant others, trainers, etc. And yes, the show depicts the sport of football as a business which is exactly what it is.  Strasmore is a financial adviser with a functioning prescription drug people who is trying to make money by ensuring his football buddies and clients don’t make the same mistakes he did. Ballers takes full advantage of their Miami setting and the leniency afforded by being an HBO show a.k.a. lots of sex, drugs, naked women and money. If you’re a fan of HBO’s former ballerfest Entourage, and you like football, this is the show for you!

Sex&Drugs&Rock&Roll – Speaking of sex, drugs and money, this ridiculous but funny FX show has brought Denis Leary back to television and that’s all that matters. We haven’t seen Leary since his last FX show Rescue Me went off the air in 2011 so watching him as a washed up 90s rock star with a money&drug problem in Sex&Drugs&Rock&Roll is great. Never have I seen so many ampersands in my life but watching Leary as Johnny Rock (nice name) who destroyed his band The Heathens by doing too many drugs and sleeping with the wife of a bandmate (John Corbett) and attempting to get it back together is comedic gold. Why? Because his talented young daughter, who he never knew existed, rolls into town with money, a huge voice and a severe hankering to be famous. Although I think this will be a fun show, if the content doesn’t carry it the music definitely will.

True Detective – For those keeping score at home, this is another HBO show but it’s on the other side of the spectrum. While Ballers touches on serious topics, it’s mostly fun. True Detective is the opposite of fun – but it does offer mystery, seriously damaged and tortured characters and, most importantly, fantastic writing. Although this is technically the “second season,” there is no Matthew McConaughey or Woody Harrelson down by the Bayou. Instead, the audience is given Vince Vaughn, Colin Farrell and Rachel McAdams in a sketchy part of Los Angeles. So far season two is as intense as the first season but in a different way. Brace yourself for some conflicted characters with questionable morals – it’s going to be a rough ride.

These are three very different shows but they’re all equally well-written and well-acted. All of them feature characters with demons but each one presents a unique tone. Tune in and let me know what you think!