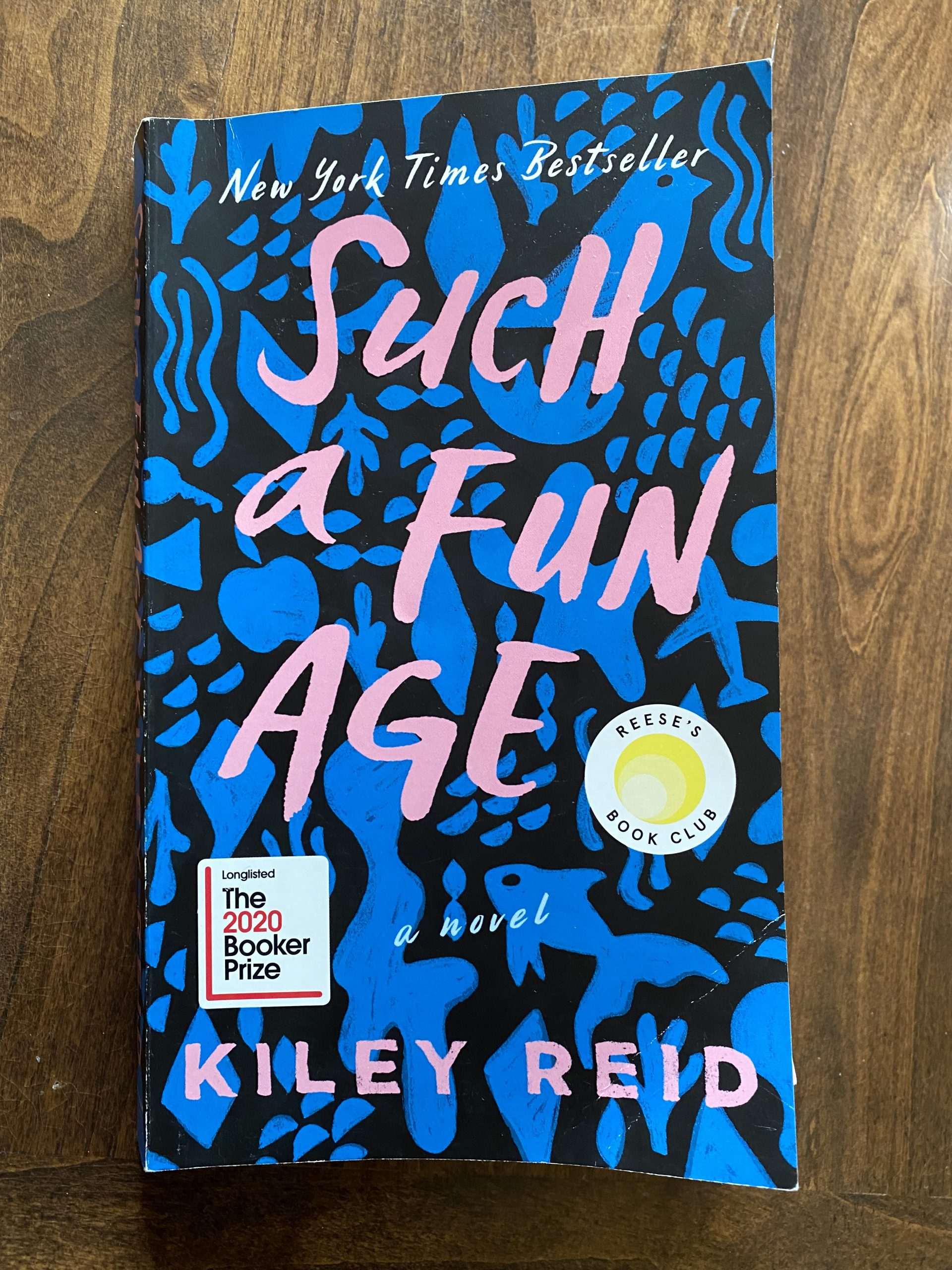 When I saw this book at my local bookstore, I hadn’t heard anything about it. But I definitely chuckled at the title. People say “Fleet is at such a fun age” all the time and, although I agree, I get a kick out of how certain phrases about toddlers become trendy. In addition to the title, I immediately noticed that the cover also said New York Times Bestseller and that it was the 2020 winner of The Booker Prize (which I learned is a literary prize awarded each year for the best novel written in English and published in the United Kingdom or Ireland). So I bought the book and I’m glad I did.

Written by Kiley Reid, Such A Fun Age is about a wealthy family, their babysitter, and the way they raise their two daughters. It is also about past and present relationships, the role technology plays in everyone’s lives, and how racism is viewed by different types of people. While the book’s title is catchy, it is also a little bit deceptive because even though one of the book’s pivotal characters is a toddler, there is a lot more going on outside of her. The book jacket synopsis highlights an event that takes place at the beginning of the narrative – a short interaction that has a long ripple effect – which drives the plot and demonstrates how small things can quickly become big things.

I was only 50 pages in when I told a friend about the novel and how it was fun to read something so topical – people have iPhones, Instagram, and talk about Black Lives Matter – but that it was written and published a year before Covid. Now those timeframes make a difference. Throughout the book, Reid cleverly points out the positive and negative effects of social media, technology, and the power of viral moments – whether they are racially charged or about breastfeeding at a professional speaking engagement.

Additionally, racism plays a pivotal role in this book – whether it’s depicting characters going overboard to be sympathetic and helpful to those who have less, or how sometimes situations backfire for the best. But it’s written in a, for lack of a better word, lighthearted way that is funny and serious at the same time. In fact, I can relate to some of the scenarios to a degree as my cousin and I were raised by two fabulous black women, Ber and Julia, when we were young children. Granted, that was Miami in the 80s and early 90s – diversity was obviously everywhere and iPhones, internet, and email did not exist – but some of the conversations we had about certain topics back then are still happening now.

For example, I find Alix’s yearning to be friends with Emira and Emira’s clear hesitation fascinating. She’s not rude, she’s just not interested in being friends with Alix – the person she works for – which of course is totally fair. I grew up differently as Ber and Juila were always family. Ber passed away in 2011 and it gutted us. We all went to Savannah for her funeral (which was definitely a celebration of her life) and we were the only white people in the room. Surrounded by black women, men, and children who knew exactly who we were because Ber had told them all about us and had shared photos, the whole experience was equally amazing and unforgettable. A few days later, we all drove from Savannah to Miami because Ber wanted to be buried next to my grandparents and we wanted to make sure she got what she wanted. Julia still lives in Miami, and we got to be with her last month when we visited for the first time in two years. I got so emotional seeing her in person after so long because she’s important to me and my Mom, and it’s important that Fleet knows her.

Anyway, back to the book. First of all, congratulations to Reid for writing a bestselling book as her debut! Wow! The accolades don’t surprise me because her writing style is relatable and real. Her method of juxtaposing Alix’s friends with Emira’s friends is excellent as the conversations these two groups of women have in person and via text are funny, sweet, and authentic. Also, showing how two people can see one incident so differently is extremely well-done. Alix and Kelley aren’t bad people at all – but they were raised in the same town and went to the same high school and had completely different experiences. Also, the way the author describes Briar and gives her dialogue is brilliant. Reid has clearly spent time around toddlers because the language she uses is spot on.

In terms of diction, Reid knows how to write a metaphor. She also understands the importance of details when writing about complex characters. Her descriptions are vivid but not flowery, creative but not over-the-top. That goes for anything from describing her characters’ attire to Emira’s reactions to racial bias. Reid also does a good job of appropriately and delicately satirizing when necessary while throwing in the ideal amount of shit-talking. In addition, the clear difference between how Emira speaks to little Briar versus how she speaks to her friends is brilliantly handled. Like I said, relatable and real kept coming to mind as I turned the pages.

While I enjoyed this book immensely, it’s not for everyone. I think it’s definitely more for women, particularly young mothers, because the descriptions of cutting grapes in half, not being able to get work done when you want to, and having to interrupt conversations with adults to talk to toddlers is a specific kind of experience. The story also moves very quickly – which I love – but that style might not be for everyone. That being said, for those looking for a well-written satire that features relevant characters and conversations, Such A Fun Age is it.

“Briar was always worried about the sequence of upcoming events.”

“Emira’s face checked into amazement. As it seemed, her entire existence had become annulled.”

“Having a baby shower never seemed too scary with a group text of women who were doing it too.”

“Briar’s voice consumed everything in its path…When Briar slept, it was as if a fire alarm had finally been turned off.”

“Children in Manhattan never opened presents at a party.”

“Kelley looked like he was being filmed for the intro of an extremely problematic music video.”

“I love when Tamra drinks because she turns into an eleven-year-old girl.”

“She’s this awesome, serious child who loves information and answers.”

“Alix wished she could just turn this night off.”

“Emira couldn’t help but think that if she weren’t working for this Mrs. Chamberlain, she’d probably be working for another one.”

“Ready to put her feelings into action.”

“The goofy trepidation of a father who worried that someone was having too much fun.”

“The sight of it chipped the side of her heart.”