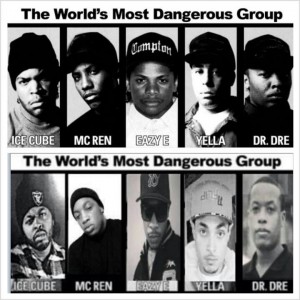 Tupac is going to Broadway and N.W.A. is going to the theater– the movie theater that is. Yep, you read that right. Hip-hop nation is taking over and the director of N.W.A biopic Straight Outta Compton has found two actors to fill very big shoes. And you won’t know either of their names because two unknown actors have been cast to play Dr. Dre and Eazy-E.

Classically trained actor Marcus Callender (Dre) and Jason Mitchell (Eazy-E) will join Ice Cube’s son O’Shea Jackson Jr., who will play the role of his father. Apparently Ice Cube got to choose who plays him but Dre didn’t get to choose. He requested that Michael B. Jordan, best known for his roles as teenage drug dealer Wallace on The Wire, Vince Howard on Friday Night Lights and Alex in Parenthood, play him but no dice. Callender has had small roles on HBO’s Criminal Justice and CBS’s Blue Bloods and Elementary. In addition to Ice Cube and Dr. Dre, Eazy-E’s widow Tomica Wright has approved the actors.

First announced in 2009, the biopic’s director noted that he wanted to “place the controversial and groundbreaking group in the proper cultural context.” Although N.W.A. was short-lived, the group as a whole, along with its individual members, definitely left their mark on music history. The group released their most controversial album, Straight Outta Compton, in 1988 and then two subsequent albums before disbanding after Eazy released Dr. Dre from his contract. Then in 1995, at the age of 31, Eazy passed away from complications from AIDS one month after his diagnosis. Although Eazy-E (also born on September 7) was arguably the most notorious of the already notorious group, he left behind two enormous talents in Dr. Dre and Ice Cube.

After leaving Death Row Records in 1996, Dre established his own label Aftermath Entertainment. He produced a compilation album titled Dr. Dre Presents the Aftermath in 1996, released a solo album titled 2001 in 1999 and then in the 2000s he focused on production for other artists. In 1998 he signed Eminem and in 2003 he signed 50 Cent – two of the biggest hip-hop stars of the last 20 years. Dre has won six Grammy Awards and is ranked by Rolling Stone as number 56 on their list of “100 Greatest Artists of All-Time.”

Recently, Ice Cube has spent more time in front of the camera than behind the microphone as he has served as one of the producers of the Showtime television series Barbershop and the TBS series Are We There Yet?, both of which are based upon the films in which he portrayed the lead character. Before he went into movies and television, Cube was ranked number eight on MTV’s list of the 10 Greatest MCs of All Time and is known as “one of rap’s greatest storytellers.”

As per usual with biopics, there are too many cooks in the kitchen (rappers in the studio?) and there are always “delays in production” so it’s no surprise that Straight Outta Compton is five years in the making and we’re only at the casting stage. To be fair they have chosen two main characters so they are on the right track but in terms of actually getting the movie filmed and into theaters – I’ll believe it when I see it.