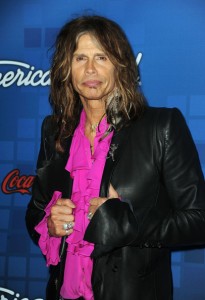 What decade is it? Steven Tyler is currently on the cover of Rolling Stone and People and for once it’s not because he’s back in rehab.   Whether you watch the show or not, you know that he is one of the judges on American Idol which is why Tyler is getting so much well-deserved attention.  Instead of showing up to work slurry his words and staring with cocaine eyes he is charming the audience, the contestants, the other judges and, most importantly, the viewers watching at home.  People are loving his funny phrases and hilarious outbursts – it’s like everything that comes out of his enormous mouth is a sound bite.  One of my favorites is something he said to a 16 year-old female contestant:  “Girl, I have sandwiches under my bed that are older than you!”  Who talks like that?  Apparently Steven Tyler does and the world is eating it up.

Everyone knows that Tyler has been the front man for Aerosmith since the 1970s – a band that has had 21 singles on the Top 40 of the Billboard Hot 100.  Here are a few you might recognize:

Of course with the kind of success this band has seen over the last four decades, decadence inevitably followed and Tyler was no stranger to booze, drugs and subsequently, rehab. He completed drug rehabilitation in 1986 and maintained sobriety until 2008 when he checked into Las Encinas Hospital rehabilitation clinic to recover from multiple leg surgeries.  He made a public statement saying that his foot repair pain was intense and that the months of rehabilitative care and the painful strain of physical therapy were traumatic.  In the late 2000s he developed a painkiller addiction for which he successfully received treatment in 2009.  At the end of 2009, Rolling Stone reported that Tyler had checked into rehab for pain management.

Since then Tyler has gotten his act together and is now the most likeable judge on one of the most popular shows on television.  That being said, Tyler hasn’t lost his edge – he is still the same badass rock and roll front man but rather than shooting heroin he is giving up-and-coming young talent the advice and encouragement they need to become stars.  His band is also releasing a compilation album called Tough Love: Best of the Ballads which will hit the streets on May 10.  Although Aerosmith has released greatest hits albums in the past, I’m assuming that Tough Love is a result of Tyler’s favorable turn as a judge on Idol.  Hopefully album will do well but since there isn’t any new music on there and most Aerosmith fans already have the songs that appear on the disc it will be interesting to see what happens. On the other hand, Tyler’s turn on Idol may have earned the band a whole new crop of young fans who don’t have the songs yet.   I guess we’ll see how it goes – but in the meantime, to quote our rock and roll hero, “Well hellfire, save matches, fuck the steep and see what hatches!”