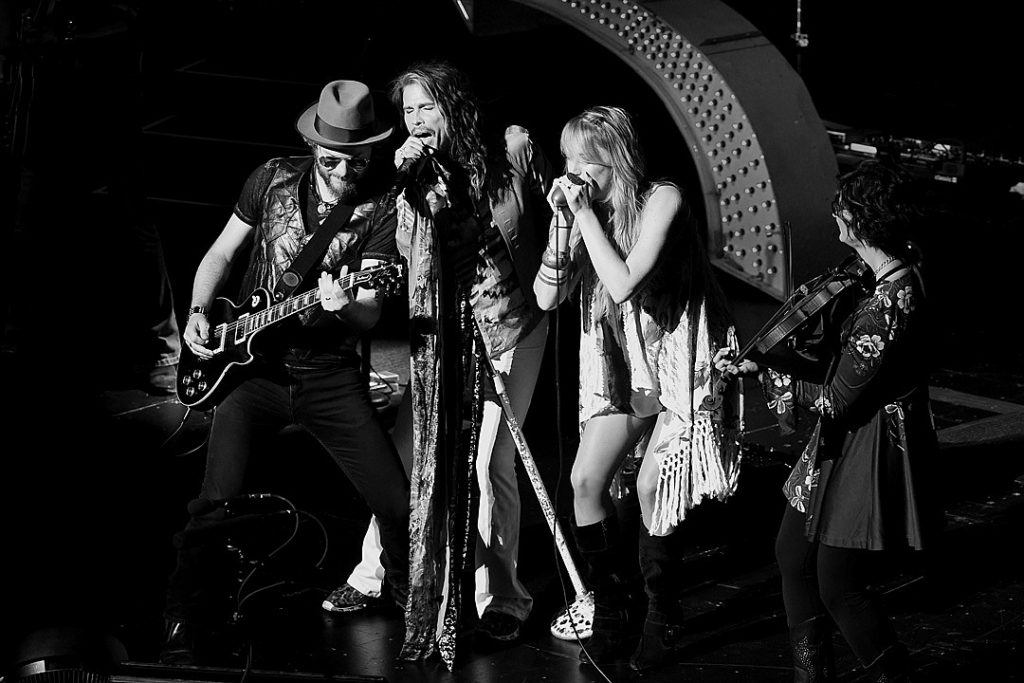 Aerosmith has been one of my favorite bands since I can remember. I have loved their unapologetic combination of rock and roll and blues since the first time I heard them and I think it’s incredible that, after five decades, they are still going. I’ve seen them live twice, I play their music on the radio all the time, own several Aerosmith t-shirts, and have read Steven Tyler’s book Does the Noise in My Head Bother You and Joe Perry’s book Rocks. So of course, when I heard that a new documentary about iconic performer Steven Tyler’s leap into country music (as a solo artist) was debuting this month, I had to watch.

Steven Tyler: Out On A Limb chronicles his “crossover” into country music through interviews with artists like Slash and members of The Cadillac Three, archival footage with Aerosmith, and recent concert footage of Tyler performing at Nashville’s legendary Ryman Auditorium with his extremely talented backup band, The Loving Mary Band. I put the word crossover in quotation marks because so much of Aerosmith’s music is rooted in blues and country – a point that is mentioned multiple times throughout the 90-minute film. In fact, one interviewee says, “half the people he’s working with in Nashville grew up listening to Aerosmith.”

As country music has evolved over the years, the lines between rock and roll, blues, and country continue to blur which I think is why the genre has gained popularity with more mainstream artists. Chris Stapleton is the perfect example of someone who has taken his outlaw country to the masses through his brilliant songwriting, relatable persona and lyrics, and collaboration with Justin Timberlake.

But back to Tyler. A few years ago, he left his hometown of Boston and moved to Nashville and then in 2016 he released a record, We’re All Somebody From Somewhere, that encompasses two firsts for him: country and solo. The members of The Loving Mary Band flawlessly accentuate his voice and help bridge the narrow gap between Aerosmith and country music. His band is so beguiling that the documentary takes place around their Ryman performance with Tyler which features a wide array of instruments including several guitars, a violin, a horn section, harmonicas, and both a piano and a keyboard.

At 70 years old, Tyler, who has always been a charismatic storyteller, is rail thin, sings into his streamer-adorned microphone with all of his frontman fervor, and rips through his set with a voice that somehow is still on point. He also wears enough necklaces, eyeliner, rings, and hair accessories to make Captain Jack Sparrow blush.

While it’s not surprising that everyone in the documentary has positive things to say about Tyler, what’s interesting is how they all mention his passion for music. The singer could have hung up his steamers a long time ago – as Aerosmith is the best-selling American rock band of all time – but here he is making new music that is soulful, authentic, and out of his comfort zone. All these Nashville artists are enamored with him which is cool to see and hear – especially since most of them are significantly younger.

And although I didn’t learn a lot of new information from the documentary (because I’m such a huge fan and have read a ton about the band over the years), I loved seeing Tyler elevate his musical prowess in a new environment. He is clearly having a love affair with Nashville and his excitement about his country endeavor is palpable. I’m also glad that the Ryman performance featured a mix of new material and Aerosmith songs. One of the highlights was Tyler hitting every note of “Dream On” while playing a white piano with his female vocalists backing him up in a haunting tone.

I think Slash summed it up perfectly: “Steven is driven by the passion of music; he’s a great example of someone who loves music and strives to do great things.”