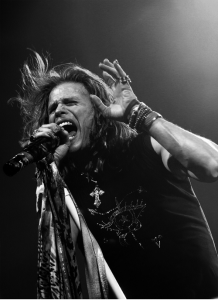 -To this day, Mick Jagger is Tyler’s hero.

-His other hero is Janis Joplin – “the scarves on the mic, the howl…she’s bone deep and still makes me weep.” He describes her voice as a “rusty, ornery, bar-at-closing-time.”

-The band was on tour “continuously and endlessly.”

-Tyler says The Kinks are the most underrated band of the 60s British rock invasion.

-He wrote the lyrics to “Walk This Way” on a piece of paper and put that paper in a bag that was stolen. When he arrived at the studio he realized the bag was gone so he rewrote the words on a wall. He never saw the bag again.

-He describes the band members as “the lost, the damned, terminally unique ones.”

-By 1978, Aerosmith had become a multi-platinum band with four albums in three years.

-During the years guitarist Joe Perry was not playing with the band, Tyler realized that he was not half the musician he thought he was without Perry.

-1987’s Permanent Vacation was the first album the band made sober. It included now legendary hits like “Rag Doll,” “Angel” and “Dude (Looks Like a Lady).”

-When Tyler’s daughter Liv was offered a part in the movie Armageddon she wasn’t sure she wanted to do a mainstream movie. Tyler said to her, “There’s nothing wrong with being a household name, baby.”

-Released in 1998, “I Don’t Want to Miss a Thing” stayed at number one on Billboard’s Hot 100 for four weeks. It was also nominated for an Oscar for Best Original Song.

“The drum came back to life with a haunting vengeance at the end of ‘Livin’ on the Edge.’”

“We had a loud, flashy, gritty, metallic vibe. Rolling Stone called us greasers, ‘Wrench Rock,’ which was strange because we looked more like medieval troubadours.”

“When I saw Almost Famous I said, ‘Holy shit, is this sideways Aerosmith or what?’”

“Joe’s been my inspiration on more songs that I would ever tell him.”

“Unlike the other band I’d been in, with Aerosmith the band members were willing to go the distance.”

“There I was, finally figuring out I had the power to communicate beyond my music.”

“The things that come to those that wait may be the things left by those who got there first.”

“Joe was an electric god who wanted his guitar to sound like a dinosaur eating cars.”

“Aeromythology was built on the glamour of self-destruction.”

“The best tours are the ones that are propelled by hit singles.”

“I want my lyrics coming straight at you.”

“Half the people in the world who hear your music own it anyway. And it’s exactly what you want them to do.”

“Songs are nothing but air and pure emotion, but they have intense effects on people’s lives. When people relate passionately to a song, all that goes on in their lives gets attached to the song – and the music never stops.”

“Half the current government of the United States has made love to Joe Perry’s licks.”

“It’s hard to tell who I am by the trail left by my musical career.”

“I may not have been quite sure of what I was doing, but I was on to something.”