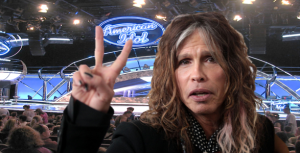 Word on the street is that the mouthpiece for Aerosmith is leaving Pop Idol (I mean American Idol) to focus on his rock and roll band. As far as I’m concerned this is both bad news and good news. While Tyler has definitely had some nut job moments on the show that’s what makes his presence great – he does not give a fuck what people think but does actually know what it takes to be a good musician, singer and performer.

I’ve enjoyed watching and listening to him the last few years – he gave the show some rock cred and also provided an opinion that had nothing to do with adhering to the pop agenda that Idol is so clearly pushing. In fact it’s gotten to the point where I can hardly stomach the Idol agenda – it’s so transparent and lame – but I always try to keep in mind that the show is the reason that both Kelly Clarkson and Carrie Underwood have high-paying jobs and I’m glad for that.

Anyway, back to Tyler. Two seasons ago I think he gave the show a much needed breath of fresh, no-bullshit air but it doesn’t surprise me that he’s bowing out. He’s made up with his band mates and although the release of their new record has been postponed the fact is that they have new music that is recorded, mixed and ready to go. Which is awesome considering Aerosmith has been around for over 40 years!

In addition to Tyler exiting, apparently Jennifer Lopez has not confirmed whether or not she will continue as an Idol judge. Do I care if Lopez returns? Although during her tenure as a judge she did show that she’s an actual human, I feel like anyone could give the same critiques and comments that she contributed. I also think the show helped her image immensely but did she help Idol’s image? Debatable. As unimpressed as I am with Lopez as an entertainer, the fact is that she is the first person who achieved a number one film and album in the same week. No easy feat.

So I guess we’ll see how it goes. Clearly Randy Jackson is an Idol lifer but no one else seems to have the same agenda. That guy has been yelling “Yo” and “Dog” and “In it to win it” for what seems like 25 years but for some reason people love it and they keep watching. But maybe it’s not about Jackson – maybe people love Ryan “Mr. Vanilla” Seacrest and his continuous requests to “dim the lights.” Either way the powers that be are going to need to find a replacement for at least one of the Idol judges – the question is who can handle the pressure?

Ellen DeGeneres? Been there done that. An asshole with a British accent? So eight years ago. A nutjob who had questionable substances in her Coke cup? Thanks for playing.

I can’t wait to see who’s next on the list as a judge – I just hope that whoever signs on will be able to bring something new to a show that needs more than a little juice.