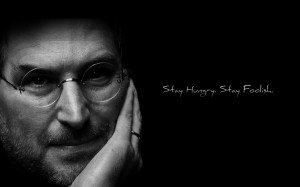 At this point everyone knows that Steve Jobs passed away yesterday and that we lost one of technology’s biggest innovators ever.  It’s amazing that we have one person to thank for being the driving force behind technology we can’t live without – i.e. iPhones, iPods, iPads and iTunes.  Although Apple was not a one-man show, Jobs was clearly more than an idea man.  He made things happen and was such an effective pitchman and speaker that people not only believed in the product, they believed in him.

Jobs also had the ability to turn out ideas at an astonishingly fast pace.

It’s shocking to think that on October 23, 2001 the very first iPod was introduced.  It could hold 1,000 songs which meant, as Jobs said, that some people’s entire music collection could fit in their pocket.  In 2001 I was running through Miami with a Discman that held a mix CD with 15 songs.  That was the thing about Jobs – he upped the ante very quickly.

September 2, 2005 – the iPod shrinks and becomes the Nano.  Poof!  No need for a pocket because now your music collection fits in your wallet.

January 9, 2007 – the iPhone is introduced and changes the game – and our lives – forever.  Jobs explained that it was three devices in one – a phone, an iPod and a computer.

January 27, 2010 – the iPad is presented.  Jobs explains that the iPad gives you “the best web browsing experience you’ve ever had” as it gives you “a whole web page you can manipulate with your fingers.”

June 7, 2010 – after a tech blog leaks the iPhone 4, it is officially unveiled.  Jobs likenes the iPhone4 to something we saw on the The Jetsons as it has video calling capabilities.  Jobs says, “You ain’t seen nothin’ yet.”

March 2, 2011 – Jobs returns from medical leave to launch the iPad 2.  Keep in mind the first iPad is barely a year old.  He gets a standing ovation as he discusses the second generation iPad which features “a dramatically faster speed and a dramatically thinner body that is one third the size of the original.”

I must admit that I had my issues with Jobs in the beginning of the iTunes era.  As a child of the music industry I blamed him for ruining the business my family was so much a part of for half a century.  But time moves on and change is inevitable.  If it wasn’t Jobs it would have been somebody else – that being said if it were anyone other than Jobs, the iPod, iPhone and iPad would not have been as smart, user-friendly and cool.

Thank you Steve Jobs – you changed our lives forever.