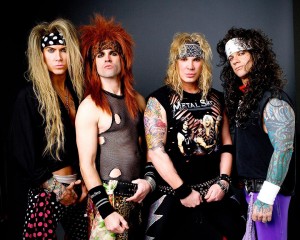 A friend of mine said: “They’re an 80s metal cover band that plays songs by Guns, Van Halen and Motely Crue.  You’re gonna love them!”  Famous last words.  I was so excited to see Steel Panther this weekend and unfortunately I have to admit that I was disappointed.  I was expecting some amazing covers by a band who really loved the Sunset Strip bands that made the 80s so legendary.  What I got was a bunch of posers who dressed and looked like the bands I love but were actually turning everything into a big joke.  One of the band members even spent his time in between sets spraying his hair with Aquanet and looking into a pink mirror.  Funny at first but it got old really fast.

Rather than using their talented front man (who looked and sounded like Motley Crue’s Vince Neil) and heavy guitar skills to pay respects to the great bands from the decade of decadence, they made fun of those bands by talking about sex, drugs and rock and roll as if it was a stupid act that everyone fell for.  While I’m well aware that not everyone loves 80s metal bands the point of going to this show was to see a band that dressed like those bands and played their songs.  Instead, they played their own songs with ridiculous names like “Asian Hooker” which would have been fine if they had played three or four of their own songs and then played 10 or 12 amazing covers.  No such luck.  In between playing boring parody Steel Panther songs they did some kind of comedy routine during which they talked about having sex with groupies and doing drugs – stuff that Crue, Guns and Van Halen did but didn’t feel the need to discuss on stage.  There was a good reason for that.

Some would say I got what I asked for when I decided to see a tribute band but if you’ve ever seen the all-girls AC/DC cover band called Hells Belles you would see why I was excited.  There is a reason why Hells Bells sell out every single show – they sing AC/DC songs like they wrote them and play all the hits.  Their lead singer sounds so much like Brian Johnson and their lead guitarist could fill in for Angus Young if necessary.

Steel Panther could learn a thing or two from Hells Bells:  Play a few of your songs and then play what people came to hear.  And shut up in between songs – no one is trying to hear your half- assed comedy routine about drugs and groupies when you’re playing a part and you all have wedding rings on.  It’s ridiculous.