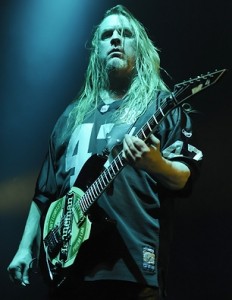 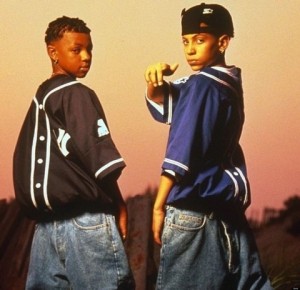 In the last few days the music industry lost two artists that couldn’t be less alike: 49-year-old Slayer guitarist Jeff Hanneman and 34-year-old 90s hip-hop artist Chris Kelly of Kris Kross. While Hanneman was known for his fast, aggressive thrash metal approach to guitar playing, Kelly and his partner in crime Chris Smith were best known for their 1992 hit “Jump.”

Since their debut album in 1983, Slayer has released two live albums, one box set, six videos, two extended plays,and eleven studio albums, four of which have received gold certification in the United States. The band has received five Grammy nominations, winning two: The first in 2007 for the song “Eyes of the Insane” and the other in 2008 for the song “Final Six” – both from 2006’s Christ Illusion.

On the other side of the music spectrum, “Jump” occupied the number one spot on the Billboard Hot 100 for eight weeks and was certified double platinum as a single. The duo is still remembered for their fashion style i.e. wearing their clothing backwards.

As a child of the 1990s I remember going to dance parties (give me a break I’m from Miami) and the DJs blasting “Jump” while everyone did a specific dance to it. I remember like it was yesterday. I also remember having the cassette tape of the song – known as a cassingle for all my fellow music nerds out there – and listening to it until I broke it. Being a metal fan, I remember hearing “Raining Blood” on the metal stations and thinking that it was some of the most hardcore stuff I’d ever heard.

So we have two people from two totally different genres and what does iTunes do? Put Slayer and Kris Kross music front and center on their homepage – a place they’ve most likely never been before. Ever.

Now don’t get me wrong – I get that iTunes is a business and it makes sense for them to want to capitalize on the fact that people might be feeling nostalgic this week. But there has to be a better way to handle it. I’m not sure how to best handle it but there has got to be a different way because the iTunes homepage is not subtle and it’s kind of obnoxious. Maybe there could be some kind of button that says something like: “Fans pay homage here.”

Hanneman died of liver failure and there is an investigation going on about whether or not Kelly overdosed. It’s sad stuff and I’m hoping that if people are downloading their music it’s because they were fans and not because iTunes inadvertently download-guilted them.