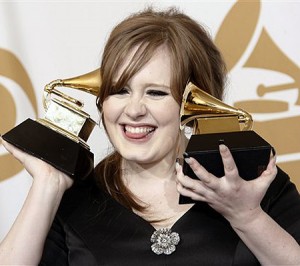 There is no question that 2011 has been The Year of Adele – she has the best selling album of the year (21) which debuted at number one on the Billboard charts. She is also now part of the Guinness Book Of World Records because in the US the album has spent a total of 12 weeks at number one on the Billboard 200, the longest an album has held the top position since 1998. As of this month, Adele has sold 18 million albums worldwide.

Here are her nominations in the major categories:

So basically Adele is nominated for every major category that she is eligible for and I’m predicting right now that she is going to win at least three Grammys. Maybe more. Her biggest competitors are the Foo Fighters, Lady Gaga and Rihanna and for the categories that don’t apply to her, I predict Foo Fighters take home the prize.

Record of the Year – Adele will win this one for sure because Katy Perry and Bruno Mars aren’t even in her league and I think “Rolling In The Deep” is a much better song than Mumford and Sons’ “The Cave” and the Bon Iver’s “Holocene.”

Album of the Year – This category is a bit more competitive as the list includes Lady Gaga, Foo Fighters and Rihanna. Adele is clearly in very good company but there is no denying how ubiquitous 21 was this year.

Song of the Year – Done deal. She should start preparing her speech now.

Best Pop Solo Performance – She may not have this one locked down because Lady Gaga’s “You and I” is awesome and people love Katy Perry’s “Firework” song (who knows why).

Best Pop Vocal Album – This category could go either way since once again Adele is in great company. This was a big year for Cee Lo Green as his song “Fuck You” was on the radio as much as “Rolling In The Deep” and people loved him as a judge on The Voice. And, as I said earlier, people love Gaga and Rihanna who are both nominated as well.

All and all I think this will be Adele’s show but the Foo Fighters should also do well as they are nominated for five major category awards:

See you February 12th for music’s (and Adele’s) biggest night!