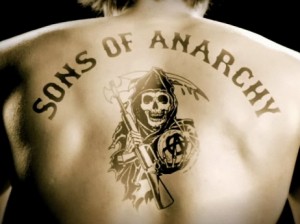 My favorite FX show has gotten more brutal that usual and I’m not sure why.  Anyone who is an avid Sons of Anarchy viewer knows that there is a reason why each episode begins with a “Viewer Discretion Advised” warning – it’s a no-limits biker show that deals with sex, drugs, lies, backstabbing, actual stabbing, guns, beatings and serious consequences.

That being said things have gotten a little more vicious recently and it’s getting to the point where some scenes are hard to watch.  A few examples:

-A stripper gets her face bashed into a mirror for sleeping with one of the members who is married.

-Two prospects suspected of stealing are forced to point a gun (that may or may not be loaded) at their own heads and pull the trigger.

-A guy is tortured by being buried with only his face above ground which is then covered with flesh eating ants.  (It’s hard for me just to type that sentence).

-One SOA member shoots another member in the face way too many times when he is caught doing something wrong.

Now don’t get me wrong.  I’m aware that I’m not watching the Disney Channel but come on.  I started watching this show because I liked the idea an outlaw motorcycle club comprised of a bunch of dudes on big bikes who make their money selling guns while using a car repair shop as their front.  I liked that it was The Sopranos on motorcycles and that even with all the leather, snarling conversation, booze, endless parade of women and gun fights, at the end of the day this show was really about doing whatever it takes you protect your family.

But the last few episodes have shown the really negative side of the motorcycle club – to the point where I’m wondering if all these scenes are gearing up for something big and if the payoff will be worth it.  To say that this show and its characters are rough around the edges is the understatement of the year but I expect more out of this show.  They don’t need to rely on the grotesque factor so why are they doing it?

Let’s get back to what made this show great – the no-bullshit attitudes and swagger that comes with it.