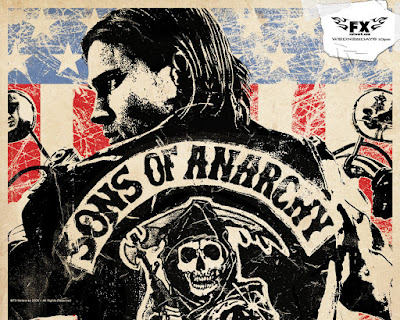 After waiting entirely too long for season three, the FX series Sons Of Anarchy returns tomorrow for what will most likely be its most intense season yet. Centered around an outlaw motorcycle club that resides in Charming, California (I know I don’t have to go into the irony of a name like that) Sons features a bunch of dudes on big bikes who make their money selling guns while using a car repair shop as their front. Does this sound like the Sopranos on motorcycles? It should because even with all the leather, snarling conversation, booze, endless parade of women and gun fights, at the end of the day this show is really about doing whatever it takes you protect your family. The way in which this motorcycle club takes care of their own is Mafioso in every sense of the word even if it means killing people, severely injuring them or running them out of town. Maybe Tony Soprano should have gone into the Harley business.

Generally speaking, residents of Charming no better than to mess with these guys or anyone who has any ties to them but others don’t take the same caution. As a result of their outlaw status, SAMCRO (the nickname of the club that roughly stands for “Sons of Anarchy Motorcycle Club Redwood Original”) has dealt with run-ins with ATF, threats from drug dealers, corporate developers and overzealous law officers. Through the years members of SAMCRO have also served lengthy jail sentences and the club has been hit with the death of family members and friends.

Vice president of the club and our protagonist, Jackson “Jax” Teller (Charlie Hunnam), is the complicated core of this club and the family. His father died in a tragic accident we’ve heard very little about, he has an infant son whose junkie mother is no longer in the picture and is currently dating a doctor named Tara who he used to date many years ago. Jax’s mother, Gemma Teller Morrow (Katey Sagal), is a force to be reckoned with and might be the most Mafioso of anyone in the club. Clay Morrow (Ron Perlman) is Jax’s stepfather and the aging president of SAMCRO. As time has passed, hints have been revealed about the dark secrets of this family’s past and the relationship between mother, son and stepfather have been severely strained. I’m assuming that this season we will learn why Gemma and Clay have gone to such great lengths to protect their sins.

Season two ended with Jax’s son Abel being kidnapped and Jax and Clay finally finding out about Gemma being raped so tomorrow’s premiere should be quite the kickoff to what is expected to be an explosive season. It’s a mistake to think this is a testosterone-fueled, gear head show that has no substance because the emotion that comes through behind all the bikes, guns and tough talk makes for great television. Although they are an outlaw motorcycle club, I find myself rooting for those who are part of SAMCRO because regardless of the avenues they take, there is nothing they wouldn’t do for their family or each other.