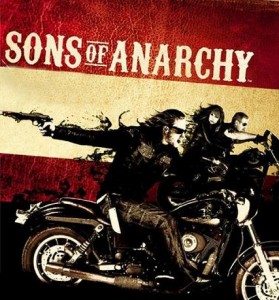 Although I’ve been writing about Sons Of Anarchy for years and have watched the show since its first season, recently, the show has been getting way more press than usual (i.e. Jax gracing the cover of a recent Entertainment Weekly issue and the show receiving a feature in a recent issue of Rolling Stone). While I think all the press is well-deserved I find it interesting that the season that’s getting the most attention is the one that the most brutal to date.

Here are a few of the most dark and ruthless moments of the show’s fifth season which comes to an end next week:

-Pope burns Tig’s daughter alive and Tig is forced to watch in utter agony.
-Opie is beat to death in prison and Jax and Tig are forced to watch the entire inhumane beating from behind prison glass.
-Gemma drives high, crashes her car and almost kills Jax’s sons.
-Jax shoves a heroin needle into the arm of his ex-wife (who has been clean for years) to ensure that she doesn’t cause more trouble.

And that’s just the tip of iceberg. Several people (Unser, Auto, Clay, etc.) have received beatings so severe that I literally have had to look away from the television. And believe it or not the emotional wreckage of the show has left even bigger wounds for its characters. It’s getting to the point where all of the Hamlet-esque type references about this show are coming true. It is literally one tragedy after another.

In addition, it’s amazing to me that the only person who really understands the horrendous danger they are all in is Tara. As much as I like Jax as a character he doesn’t seem to be completely aware of how out of control things have gotten for SAMCRO and that they are barely getting by. As I’ve said in the past, the intrinsic theme of this show is protecting family – whether that’s your motorcycle club family, your actual blood relatives or both – but lines are getting more and more blurry as this season comes to a close. It’s as if people will do anything to further the tangled, twisted agenda even if they don’t get out alive.

The best part of this season is the introduction of three new characters that are extremely important: 1) Nero –an ally and partner to the club who has been in the game a very long time. 2) Pope –probably the most well-to-do villain/sort of ally Jax has ever dealt with as he as intelligent as he is powerful and dangerous and has unlimited resources. 3) Toric – the newest character is a former US Marshal Toric who happens to be the brother of the nurse Auto violently killed in prison. Not only does he bring law enforcement experience and more nutjobness to the plot (the last image we saw of Toric from this week’s episodes was him reading French poet/madman Antonin Artaud’s Watchfiends and Rack Screams with an arsenal of guns any gang would be jealous of displayed on the bed next to him).

Pope and Toric might just prove to be two of the most vicious people SAMCRO has ever dealt with which is saying a lot considering the cast of crazies on this show. To say next week’s finale will be an explosive episode is an understatement and I’m willing to bet that there will be a few significant casualties.

Next season is the last for Sons Of Anarchy so this finale should function as quite the setup for their concluding year. I’m just curious to know who is going to survive the motorcycle tragedy that is SAMCRO.