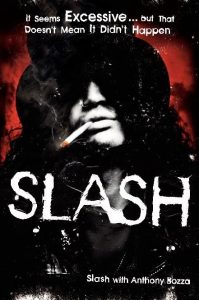 It’s no secret that I’m a rock and roll biography enthusiast so reading about one of my favorite guitarists was a no-brainer – even if the book is over 450 pages. Because I’m a huge fan of Guns N’ Roses, Velvet Revolver, Slash’s Snakepit, and the albums Slash recorded with Myles Kennedy and the Conspirators, I wanted to understand the backstory of how Saul Hudson became Slash and how the bands I love came to fruition and why they experienced such demolition.

Although the book was incredibly interesting and featured some anecdotal gems, it was way too long and went into way too much detail about Slash’s drug and alcohol problems. While heroin and vodka clearly hindered his path over several decades and understanding their impact was important, some of the details were unnecessary. That being said, the details and events that explain how he became who he is as a person and musician, and how he met the members of his bands, are fascinating.

Although musicians always have help when writing their biographies (in this case author Anthony Bozza lent a hand), I was impressed with some of the prolific comments that came from this book:

Because this book was published in 2007, a few things have changed since it initially hit the shelves. It’s funny to read Slash talking about how the idea of Gun n’ Roses reuniting is asinine and yet we have tickets to see them later this year. I also think it’s cool that 2017 marks the 30th anniversary of the release of Appetite For Destruction. However, it’s horribly sad to read about how much he enjoyed being in a band with Scott Weiland who is no longer alive.

In addition to the bands he’s been a part of, this book made me realize that Slash has lent his guitar skills to many songs I like that are unrelated to his rock groups. And now I know why! A few examples:

Michael Jackson – “Black or White” and “Give in to Me”

Lenny Kravitz – “Always on the Run”

Carole King – “Hold Out For Love”

Chris Daughtry – “What I Want”

While there is no question that Slash is a rock and roll guitarist who will always be revered and remembered for his excess as much as his musicianship, it’s also clear that he wants it that way. His book is well-written and exciting and it shows that there is more to being a rock and roll guitarist than booze and drugs – but they do play a significant part. Slash has come a long way in his journey to be great and reading all the backstories makes me even more excited for the show in August – if that’s even possible.