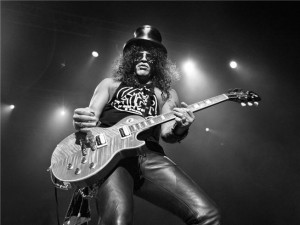 Unless you’ve been living under a rock recently, you know that Guns N Roses will be inducted into the Rock & Roll Hall of Fame this month. 12 days from today to be exact. But there is a good chance that we will not see Guns N Roses perform on what is arguably the band’s biggest night.

Slash and Axl blame each other for their inability to get along and who knows what Duff McKagan, Steven Adler and Izzy Stradlin think about all this. It’s ridiculous that they can’t get it together – what if they played and it worked and there was a reunion tour? Stranger things have happened – Van Halen has a new album for crying out loud – so I don’t think that notion is ridiculous by any means.

As much as I love Axl Rose and Guns N Roses there is no question that Slash is as good at playing guitar as Axl is at being a front man. I saw Slash play as part of Velvet Revolver (with Scott Weiland) and he was extraordinary. Clad in black leather pants and Chuck Taylor’s he played his guitar so well and with such ease it was like he was born with a Les Paul in his hands.

I’m so glad I got to see Slash live as he is one of the most critically acclaimed ax men of all time. In 2005, he was named “Best Guitarist” by Esquire and in 2009 he was named runner-up on “The 10 Best Electric Guitar Players” list in Time. In 2011, Rolling Stone placed Slash at number 65 on their list of “The 100 Greatest Guitarists of All Time.”

In 2007, Slash was honored with a star on the Rock Walk of Fame and his name was placed alongside fellow legendary guitarists Jimmy Page, Eddie Van Halen and Jimi Hendrix. In 2010 he was presented by West Hollywood mayor John Heilman with a plaque declaring August 26 as “Slash Day.”

With that much talent it’s really hard for a fan like me to accept that two grown men can’t work through their differences and make awesome music again. Or at least show up and perform together on the night they are receiving one of the greatest honors in rock and roll.

That being said, regardless of what happens on April 14, Slash has a lot going on. His new solo album Apocalyptic Love is slated for release on May 22 with Alter Bridge’s Myles Kennedy singing on every track. Kennedy initially caught Slash’s attention because the former had auditioned to sing on Led Zeppelin’s 2008 tour that never came to fruition.

In 2010, Slash went on a big world tour with Kennedy, bassist Todd Kerns and Brent Fitz during which the group wrote the songs for Apocalyptic Love during their downtime. The group kicks off an American tour this May and Slash has been quoted as saying how thrilled he is to be playing with musicians that leaves the drama at the door.

“I didn’t know it could be as easy as this, because it just really hadn’t ever been like that for me… So the hassles of the road are totally tolerable when there’s not a lot of unnecessary baggage that we have to navigate every fucking day.”

Maybe the original Guns lineup can take a quick lesson from Kennedy and company and leave their drama at the door on April 14. This Guns N Roses fan is crossing her fingers but not holding her breath.