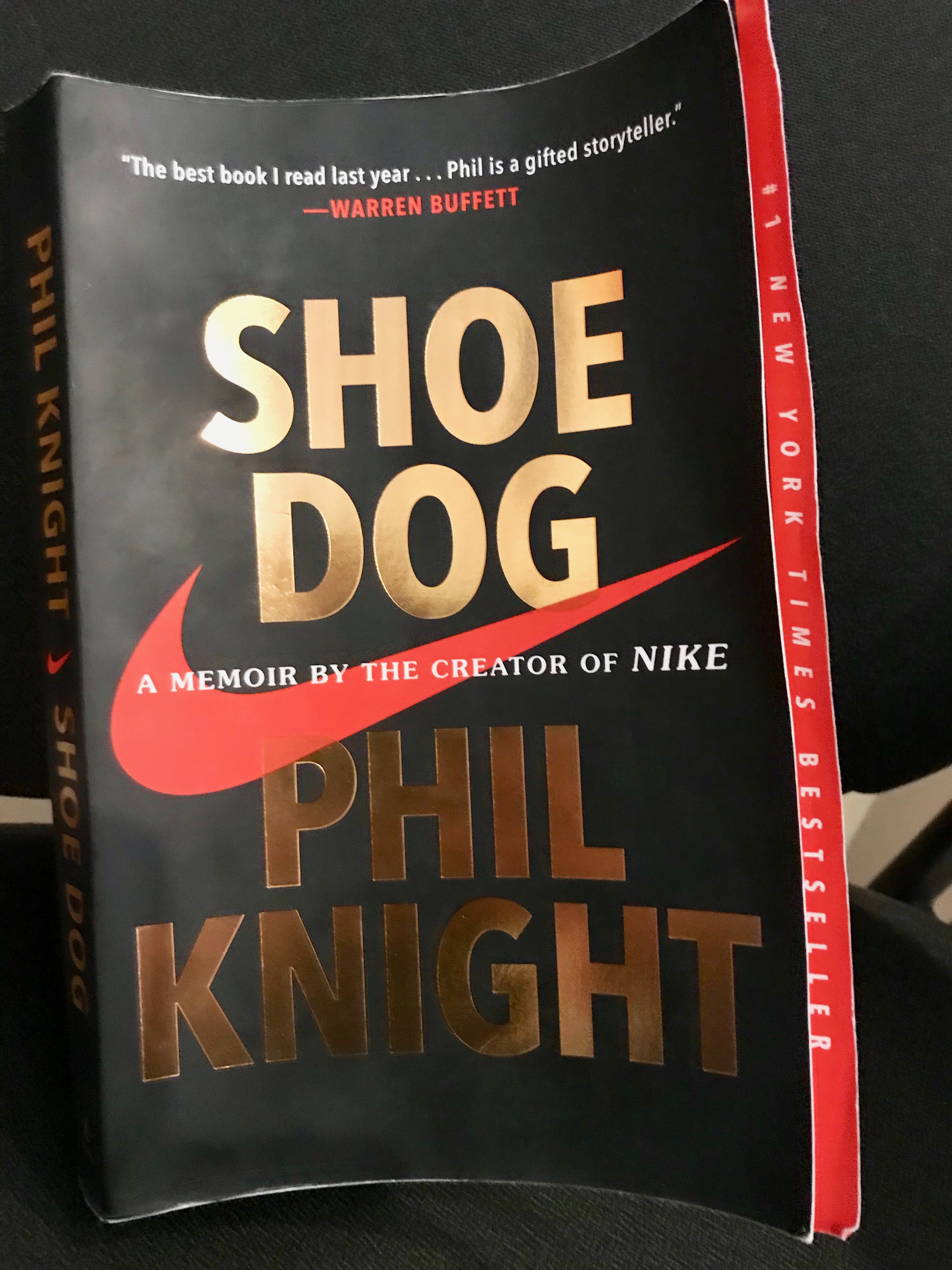 Last year one of my students wrote a research paper about the power of logos – how and why there are certain ones that are recognized globally including McDonald’s, Pepsi, and of course, Nike. All over the world people see the Nike swoosh and they know exactly what that means and what to expect when they see it.

So of course, as a PR person and sports fan, when I saw Shoe Dog in my local bookstore I couldn’t wait for it to come out in paperback (I don’t usually buy hardcover books) and a few months ago it arrived! I knew it was going to be good – a #1 New York Times Bestseller designation is no joke – but I didn’t expect it to be great. At 386 pages it was in fact, a page-turner.

What’s interesting about Nike founder Phil Knight is his ability to be relatable through these pages – even though he’s worth over $30 billion. From the beginning he wanted to find a way, without being an athlete, to feel what athletes feel. He wanted to be able to play all the time instead of working or to enjoy working so much that it felt like the same thing. He was all about the “spirit” – of the brand, the company, and the people he hired.

And it shows. Knight’s memoir is fascinating because, in both the book and throughout his life, he poured his heart and soul into the things and the people he believed in most. As a result, he comes off as honest, innovative, and intrinsically humble. He is also not afraid to admit the mistakes he made along the way – both personal and professional – which lends to the authenticity of him and his story.

Over four decades have passed since the inception of Nike and its continued success is the result of Knight and his team doing whatever it took to ensure that his company, his “business child,” not only survived but thrived. A true competitor, he always wanted to be the best which meant beating the best which at the time meant beating Adidas. He still watches their numbers. What sets Knight apart in his storytelling is that he was always willing to go the distance – both literally and figuratively – to ensure that his “little shoe company” prospered. He also acknowledges that none of it would have been possible without the help of his wife. Good man.

In 1962 he wrote a research paper about shoes for a seminar on entrepreneurship and argued that Japan was the place to make the best running shoes happen. He decided to take a backpack trip there (and around the world) to find out more.

The founder of Nike had trouble selling encyclopedias in Hawaii.

His sister Jeanne was his company’s first employee.

Knight’s team was comprised of innovative thinkers, who didn’t take no for answer, and who seemingly would follow their fearless leader over a cliff. Almost everything they did was out of the box.

He spent so many years going back and forth about going public.

The idea behind the logo was that it “evoked a sense of motion”:

Nike – the Greek goddess of victory – was introduced to the world in 1972.

Sales increased every year but Nike was constantly in danger of going out of business.

In 1977, a former aerospace engineer and his business partner came up with injecting air into a running shoe. Knight was skeptical at first, but gave the prototypes a try on one of his many runs, and decided they were “one heck of a ride” and worth looking into.

The brand reached Hollywood when Farrah Fawcett wore a pair of Nikes in a 1977 episode of Charlie’s Angels. By noon the next day, every store across the nation sold out of those shoes.

Nike went through several lawsuits, negotiations, and issues over the years. Definitely not an easy ride for Knight.

1980 was a big year: Both Apple and Nike went public the same week and sold for $22 a share. All of the sudden Phil Knight was worth $178 million.

His words of wisdom resonate:

“History is one long processional of crazy ideas. The things I loved most – books, sports, democracy, free enterprise – started as crazy ideas.”

“Don’t stop. Don’t even think about stopping until you get there, and don’t give much thought to where ‘there’ is. Whatever comes, just don’t stop.”

“Life is growth. You grow or you die.”

“Don’t tell people how to do things, tell them what to do and let them surprise you with their results.”

“No matter the sport – no matter the human endeavor, really – total effort will win people’s hearts.” No truer words.

“We wanted, as all great businesses do, to create, to contribute, and we dared to say so aloud.”

“Change never comes as fast as we want it.” Amen.

“Taking a chance on people…You could argue that’s what it’s all been about.”

“Mothers are our first coaches.” Mine still is and always will be my favorite coach.

My favorite: “I’d like to warn the best of them, the iconoclasts, the innovators, the rebels, that they will always have a bull’s-eye on their backs. The better they get, the bigger the bull’s-eye. It’s not one man’s opinion; it’s a law of nature.”

“At our most trying moments, we’ve managed to emulate those athletes I most admire. We’ve held on, pressed through. And now we’ve endured.”

I like that Knight recognizes the connections between the numbers and names that punctuated his life and the story of Nike. Examples: The River Jordan, Kobe in Japan, and Tiger shoes. How could he have known that Michael Jordan, Kobe Bryant, and Tiger Woods would become some of the most significant Nike brand ambassadors?

So many coincidences pointed Knight in the direction of Nike starting with him discovering that in the Aristophanes play, called Knights, set in the Temple of Nike, the warrior gives the king a pair of shoes as a gift.

Some things are meant to be and Knight telling his story is definitely one of them.