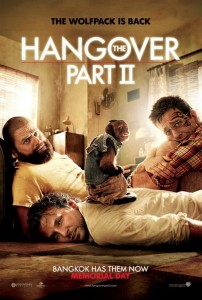 Sequels are usually a result of one of two things: 1) The first movie was so successful and the characters were so fun and/or interesting that the plot deserves to go on.  2) Or, the first movie made so much money that greedy studio execs can help but want more.

Some films have had several popular sequels making them more of a classic series (or in some cases trilogies) than a group of movies:  the Rocky, Bourne, Lethal Weapon, Godfather, Pirates of the Caribbean, Lord of the Rings and Start Wars movies for example.  Arguments could go on and on about which one of each was the best.

A few examples of legit sequels that did the originals justice:

Wayne’s World 2 – Our favorite Midwestern rocker boys brought the laughs for a second time while still keeping music as a main character.

American Pie 2 – The gang from high school got older but not wiser – and who can possibly get enough of Stifler’s mom?

Shrek 2 – Brought all the satirical good stuff from the first one and an actual storyline as well!

Toy Story 2 – Loved this movie and Toy Story 3 for the exact same reasons I loved the original – great dialogue paired with a story told through the eyes of toys who just want to be wanted.

Examples of awful sequels that should have never happened:

Speed 2: Cruise Control – The studio should have shut this shit down the second Keanu decided to take his “whoa” elsewhere.

Blues Brothers 2000 – 18 years is a long time to wait for a sequel and without John Belushi what was the point?

Sex and the City 2 – I loved seeing the girls back in action in the first movie but this one was pure overindulgence making the girls look like old women at amateur happy hour.  In Abu Dhabi.

Ace Ventura 2 – The first movie was hilarious and made Jim Carrey a star but the second movie relied on disgusting idiot humor and a rhino image I’ve been trying to forget since 1995.

So why all this talk about sequels?  Last night I saw The Hangover 2 – a movie I had been anticipating since dying of laughter after seeing the first one.  I think The Hangover is one of the funniest movies I have ever seen with one-liners that I use on a seemingly weekly basis.  I think the movie was so great because Phil “I don’t give fuck” Wenneck, Stu “the uptight dentist” Price and Alan “a few screws loose” Garner are three perfectly cast characters who play off each other extremely well.   Also, whether we want to admit it or not, a lot of us have had mornings when we woke up the not knowing what the hell went on the night before.  Vegas, Boulder, Miami – these things happen and when you finally piece things together hilarity and/or embarrassment inevitably ensues.

Since The Hangover 2 hit theatres only two days ago I don’t give away too much but I will say that it’s very similar to the first one – except it takes place in Bangkok rather than Vegas.  One could argue the “if it ain’t broke don’t fix it” side in that the first movie was so popular why mess with a formula you know works.   However, this is supposed to be another movie, not an extension of the first one.  Or at least that’s what I thought.

Expect the same drill – Phil, Stu and Alan waking up the morning after a bachelor party looking like they got hit by the bourbon, vodka and whiskey trucks and not having the slightest idea what the hell happened.  There are a few surprises – some really funny and some really gross – but I wish that the movie posters didn’t give away what could have been one of the most shockingly funny moments: When Stu wakes up with a Mike Tyson-style tattoo on his face.  It was still funny to see Phil and Alan’s reaction but the fact that we already knew it was coming kind of ruined it.

I don’t want to say any more because not enough people have seen it yet but as far as review goes here it is:  The Hangover 2 doesn’t have the kick of the original but that’s because we expect these guys to bring their nutjob antics wherever they go.  That being said it’s fun to take another ride with them on the crazy train!

I would love to hear what you guys think of the movie – was it classic or did it make you want to take roofies and forget the whole thing happened?