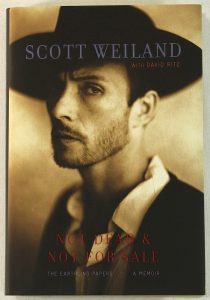 Unfortunately I need to start off by recognizing the eerie nature of the title of this memoir since Stone Temple Pilots lead singer Scott Weiland (born Scott Kline) died on December 3, 2015 at age 48 of an accidental overdose. Reading his words of hopeful redemption was rough because, as many times as he tried to get clean, the rock and roll singer who helped defined the 90s was unable to survive himself.

Published in 2011, Not Dead & Not For Sale is everything I hope for when I start reading a rock and roll memoir – truthful, introspective, raw, honest, fast-moving, and in your face. Written with the help of David Ritz – who also helped Joe Perry write the fabulous Rocks – it’s clear that Weiland was ready to write his story, no matter how many crashes and burns he endured.

As he talked about his childhood, trading sports for music, relationships, discovering drugs (which is the major thread connecting most of what happened to him), having kids, and making peace with himself, I found myself excited but bummed to be part of his journey. Because drugs play a major role in the stories of so many musicians, it can get really old reading about the rehab stints, money lost, and relationships ruined. But Ritz and Weiland made this story captivating –even though I knew how it ended.

Throughout the book, all of his drug stories were punctuated by song lyrics (and the meaning behind them) which of course was the talent that makes Weiland both important and memorable. He was an excellent songwriter and an alluring frontman – I saw him with Velvet Revolver in 2004 and will never forget the metal rasp of his voice.

Self-aware and self-destructive, Weiland’s insightful story was both exciting and devastating to read. On page 21 we learn that, at age twelve, he was raped by a man who rode the same bus to school. Weiland explained that he suppressed the memory because he was too scared to tell anyone about it – until it came up a few years prior to 2011 during one of many rehab stints. Horrible. I found it sad (and also interesting) that there was no mention of the incident contributing to his lifelong issue with drugs that ultimately killed him.

“This book is an attempt to appreciate the complexity of so much success in the midst of so much chaos.”

“I’m not arrogant enough to call it the truth. But I do call it my truth. My life has been twisted, demoralized, redemptive, remarkable…Be ready for the rabbit hole.”

“I’ve sold nearly 40 million records and at the time I didn’t appreciate it much.”

“There is no peace…someone is always showing up with calculated suggestions and implied instructions.”

“I am committed to an honest assessment of the wreckage of my past.”

“Much later in life when my brother Michael died, part of me disappeared and has never returned. It hurts to love.”

“We do what we do and are responsible for our own actions. I don’t believe we are victimized by circumstance. There are, however, stories to be told.”

“Rock and roll, like a siren song, was calling to me.”

“I believe most bands are born at a time of youthful optimism and fresh energy. The motivation is strong and the future unlimited. Why not think big? Why not live in hope rather than fear?”

“The biggest musical challenge I had was facing the truth.”

“Love’s a light that can’t be extinguished.”

“Our band was beginning to catch the wave of alternative energy sweeping over the music business. With a few months, STP, Tool, and Rage Against the Machine all got deals with major labels.”

“We were dead serious about playing the kind of self-reflective rock that we respected.”

“We wanted to get to the essential elements of what we were all about – the core of our music – so we called the record Core…Critical flop but commercial smash – that’s the story of Core.”

“Metal radio was playing us – “Sex Type Thing” was seen as a metal song – and that both bugged and pleased us.”

“If your hearts and ears are open – as ours were – you absorb the world around you.”

“Love and pain, like blood and ink, swim in the same sea.”

After cutting his first demo: “I felt like a professional beginner.”

The name Stone Temple Pilots came from the STP oil treatment – a brand Weiland loved. “I loved the way [NASCAR driver] Richard Petty, a fantastic character, was rock and roll hell on wheels. He wore the STP logo. Those letters represented it all – rebelliousness, chance victory, going for broke.”

On Nirvana’s Nevermind: “The record started a tidal wave of things to come. The wave was glorious, but the tide brought destruction.”

On his Velvet Revolver bandmates Matt Sorum, Duff McKagan, Dave Kushner, and Slash: “These guys attacked rock and roll like a street gang.”

Velvet Revolver’s first album, Contraband, sold over four million copies. “Velvet Revolver was a powerful force. There was so much energy on that stage that at times it felt absolutely combustible…We were a bunch of renegades held together by a rough passion that none of us completely understood. We were dangerous. We were on a runaway train, and audiences were drawn to our breakneck speed.”

If you’re a fan of STP and/or Scott Weiland, I cannot recommend this book enough. In fact, I think if you are a rock fan and you read this book, it will turn you into a Scott Weiland fan. His story is tragic but the writing is incredible.

Heartbreaking line: “I’m a tenacious recoverer. I never quit trying to quit. That counts for something.”