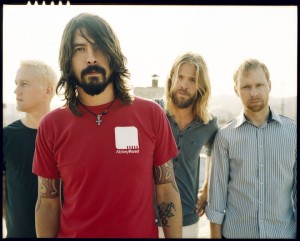 Anyone who has ever met me or has read this blog knows that I love Dave Grohl and will always take any opportunity to write about him and/or the Foo Fighters so when I saw that Rolling Stone magazine did a readers’ pool on the 10 Best Foo songs I had to share what I learned:

10) Stacked Actors – The lead song to the Foo Fighters’ third album, There Is Nothing Left to Lose, “Stacked Actors” functions as the band’s way of calling out the fake people of Hollywood. Of course rock and roll’s favorite female nutjob Courtney Love felt that the line “you’re just another aging drag queen” was about her, but Grohl has denied those accusations.

9) Learn to Fly – This song was their first single to enter the Billboard Hot 100, peaking at number 19. This was partially due to their hysterical video for the track, featuring Tenacious D as airplane janitors. The second-biggest hit of the band’s career, topped only by “Best of You,” the song features a beginning guitar riff that is immediately recognizable by any Foo Fighters fan.

8) Aurora – Because it was never released as a single most casual fans don’t know it, but clearly some fans think it’s great otherwise it would have never made it on this list. According to Grohl, the song is a nostalgic look back at Seattle and the life he once had. “That song actually questions the meaning of life, probably. It’s probably the heaviest thing I’ve ever written.” Although I like the song I would have put “Walk” from 2011’s Wasting Light at number eight instead.

7) Monkey Wrench – The recording of the Foo Fighters second album, The Colour and the Shape, wasn’t going well and Grohl did not like what drummer William Goldsmith doing so he wound up playing the drum parts himself and Goldsmith left the band. A rock and roll/punk song about freedom, “Monkey Wrench” is one of those songs that quickly let listeners know just how big of a voice Grohl has and that his talents go way past the drum kit.

6) All My Life – When the Foo Fighters emerged from a three-year recording hiatus in 2002 with One by One, they decided it was time for a heavier sound. The group spent three months on the disc, only to scrap the entire thing and start again after taking a break while Dave Grohl toured with Queens of the Stone Age. When he returned the band turned out the album in just two weeks and “All My Life” became a huge radio hit, justifying the unorthodox recording process. This song came out when I was a senior in high school and I remember thinking that Grohl was bringing out some of his old-school Nirvana intensity and loudness. I loved it.

5) Times Like These – The lyrics to the second single from One by One were directly inspired by Grohl’sfear that the band might not survive the turmoil of making the album. “I am a little divided,” he sang. “Do I stay or run away/ And leave it all behind?” The song became the second hit from the disc and is definitely my favorite Foo Fighters song because it discusses what it feels like to make tough decisions while staying very true to the band’s rock and roll sound.

4) My Hero – Every time I hear this song I think of Varsity Blues and apparently Rolling Stone agrees as cites both the 1999 James Van Der Beek-a-thon and 1983’s Valley Girl. Although the song is linked to those teen movies, Grohl has explained that the song is about his real heroes as a child were regular people that he trusted and not rock stars or athletes.

3) Best of You – The Foo Fighters took to the road in 2004 to campaign alongside John Kerry, giving the band the experience of working toward something greater themselves. They channeled that feeling into the songs on their 2005 LP In Your Honor and “Best of You” was the lead single. It became a worldwide hit and was even covered by Prince during his 2007 performance at the Super Bowl.

2) The Pretender – The lead single from Echoes, Silence, Patience and Grace which was cut with Pixies producer Gil Norton in just a month, “The Pretender” was subconsciously inspired by the Sesame Street song “One of These Things is Not Like the Other.”

1) Everlong –Earning 500 more votes than anything else on the list, this song was one of the biggest blow-out RS has ever seen. Although the song became a decent-sized radio hit in America, it failed to crack the Hot 100 but a few months after it came out Grohl was a guest on Howard Stern’s show and he played the track on acoustic guitar. It wasn’t even a planned performance, but Howard loved it and played it countless times on his widely syndicated show. It gave the song a whole new life, and to this day Grohl credits Howard Stern with the song’s incredible popularity. I have the acoustic version from Stern’s show on my iPod and as good as the original version is the acoustic version is beautifully heart-wrenching and absolutely worth listening to as soon as possible.

What do you think of this list? Would you have chosen these songs in this order?