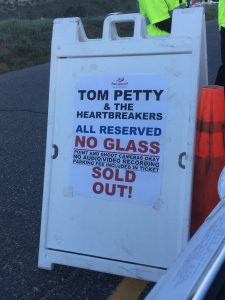 Almost 15 years ago (August 21, 2002) I moved to Colorado and on that same day I saw Tom Petty and Jackson Browne at Red Rocks. They rocked, it rained, and so began a lifelong adventure in the west. Since that date, I’d seen Tom Petty twice: June 8, 2005 in West Palm Beach, Florida and at Mile High Music Festival in Denver which took place July 19 and 20, 2008. But I never thought I’d see him again at Red Rocks. Luckily, I was wrong.

Embarking on their 40th anniversary tour, Tom Petty and the Heartbreakers made their way back to Red Rocks for a show that was everything the crowd could have hoped for in terms of energy, song choices, and ambiance. At 66 years old, Petty sounded incredible. Both his voice and guitar playing were on point – it was like no time had passed. He is a storyteller and his unparalleled ability to mix southern twang with infectious rock and roll is what draws people to his shows and why they sell out every time he tours.

Clad in a turban-like bandana and brown fringe jacket, Petty repeatedly thanked the crowd for their excitement and for showing up to watch his band perform. He made it clear that he was as happy to be there are we were. It’s absolutely amazing that he has been touring for four decades and he still cares about putting on the best show possible. It mattered as much to him as it did to us and that’s a big deal. 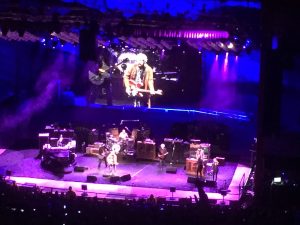 Although the audience was clearly there to see Petty and his loyal Heartbreakers, it was exciting to see Joe Walsh open for him. I had never seen him live so watching the man responsible for the most recognizable guitar in the Eagles and James Gang catalogs was so exciting. While Walsh’s guitar playing was spectacular, his singing wasn’t my favorite. He sounded like the years had taken their toll which was disappointing but at the same time I tried to keep in mind that he was never hired to sing. He was hired to shred – and shred he did. He played ten songs including solo hits “Ordinary Average Guy” and of course “Rocky Mountain Way,” and two of my other favorites “Turn to Stone” and “Funk #49.”  He also dedicated “Take It To The Limit” to his late Eagle friend Glenn Frey.

While we started the night with a rainbow, a few songs into Petty’s set brought rain and a subsequent delay that sent a lot of concertgoers running. Petty got on the microphone and told the crowd that they were being told to stop but they hoped to take the stage again quickly. Moments like that remind me that musicians are people too and, like us, they have to roll with what’s happening. Knowing that Colorado storms usually come and go quickly, we stayed put until the sky cleared and the band played until almost midnight. Highlights for me were “Mary Jane’s Last Dance,” “I Won’t Back Down,” “Free Fallin’,” “Leaning to Fly,” “Runnin’ Down a Dream,” and both encores which were “You Wreck Me” and “American Girl.” His 21-song set at one of the most renowned venues in the country was spectacular. Thank you Mr. Petty for caring as much as we do about delivering one hell of a night. Those are the shows that get talked about for years to come.