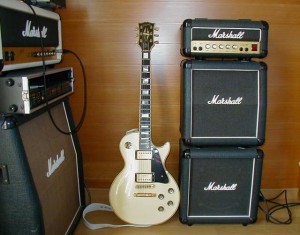 When you think about what rock & roll means a few things probably come to mind: guitars, leather pants, a good time and volume. Well, we can thank Jim Marshall for the last one as he is THE pioneer of guitar amplification. In fact he is responsible for giving rock and roll the loud sound that helps set it apart from all other music genres.

Also known as “The Father of Loud” or “The Lord of Loud,” Marshall created kits used by some of the biggest names in rock including Pete Townshend, Jimi Hendrix and Eric Clapton. Over the years his amplifiers have achieved iconic status and as a result, Marshall has been listed as one of the four forefathers of rock music equipment along with Leo Fender, Les Paul and Seth Lover.

Marshall’s legacy began in the 60s when his many guitar playing customers, like Townshend, spoke of the need for a particular kind of amplifier. Marshall saw an opportunity and recruited an 18-year-old electronics apprentice, Dudley Craven, who was previously working for EMI. With Craven’s help Marshall began producing prototype amplifiers, resulting in the foundation of Marshall Amplification in 1962. It took Marshall six attempts to create an amp he was happy with, which later became known as “the Marshall sound.”

In addition, Townshend convinced Marshall that there was a need for less-expensive guitar amps and the “Marshall Stack” was born.

As the company grew, Marshall expanded his products and unveiled the Master Volume Marshall amps and the classic JCM800 split channel amps. Soon after he started production, musicians such as Hendrix and Clapton were using his equipment. In 1967, Jimi Hendrix stated, “There’s nothing that can beat my old Marshall tube amps, nothing in the whole world.”

In 1984 Marshall was awarded the “Queens Award for Export,” an honor bestowed by Queen Elizabeth II of the United Kingdom in recognition of Marshall Amplification’s outstanding export achievement over a three-year period. In 1985, Marshall was invited to Hollywood to add his hand prints to the Rock and Roll Walk of Fame.

Today musicians have been paying their respects to Marshall through quotes and comments.

“The news of Jim Marshall passing is deeply saddening,” said Slash. “Rock and roll will never be the same without him. But, his amps will live on forever.”

Nikki Sixx was quoted saying that Marshall was “responsible for some of the greatest audio moments in music’s history – and 50 percent responsible of all our hearing loss.”

Any concert you attend these days will have the white “Marshall” logo on stage. No question. Rock and roll bands, metal bands, punk bands and anyone else who want their sound to be heard appreciate the heavy distortion made possible by Marshall amps.

Mr. Marshall – thank you for being such a huge contributor to rock and roll. We will never forget you changing (and creating) the sound of rock and roll.