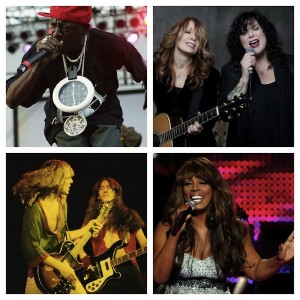 Talk about a class that covers a wide range of music genres. The Rock & Roll Hall of Fame officially announced next year’s inductees which include Rush, Public Enemy, Heart, Randy Newman, Donna Summer and Albert King.

Some fun/impressive facts about the inductees:

Rush– The Canadian rock group possesses 24 gold records and 14 platinum (three multi-platinum) records, placing them third behind the Beatles and the Rolling Stones for the most consecutive gold or platinum studio albums by a rock band.

Public Enemy– In 2004, Rolling Stone magazine ranked Public Enemy number 44 on its list of the Immortals: 100 Greatest Artists of All Time. The band is the fourth hip-hop act to be inducted after Grandmaster Flash and the Furious Five, Run-DMC and the Beastie Boys.

Heart – Selling over 30 million records worldwide with Top 10 albums on the Billboard Album Chart in the 1970s, 1980s, 1990s and 2010, Heart is among the most commercially enduring hard rock bands in history.

Randy Newman– A singer-songwriter, arranger, composer and pianist who is known for his sarcastic pop songs and for film scores, Newman has been nominated for 20 Academy Awards and has won twice. His film scores include Ragtime, The Natural, Seabiscuit, the Toy Story trilogy and Cars, among many more. He has also won three Emmys, five Grammy Awards and was inducted into the Songwriters Hall of Fame in 2002.

Albert King– An American blues guitarist and singer who was a major influence in the world of blues guitar playing, King’s music had a wide and long-term influence on Jimi Hendrix, Eric Clapton, Robbie Robertson and later Gary Moore and Stevie Ray Vaughan.

Unfortunately Summer passed away this May and King, who died in 1992, will both be earning their honors posthumously. Lou Adler and Quincy Jones will both receive the Ahmet Ertegun Award for non-performers.

The Rock and Roll Hall of Fame induction ceremony will be held on April 18, 2013 at the Nokia Theater and broadcast on HBO May 18.