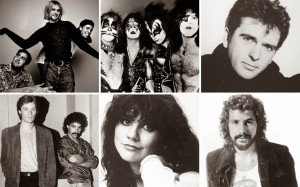 Sometimes institutions get it right and this year one of the most coveted institutions in music really got it right. The Rock and Roll Hall of Fame announced the Class of 2014 and it’s a good one: Nirvana, Kiss, Peter Gabriel, Hall and Oates, Cat Stevens and Linda Ronstadt will be inducted in April. Additionally, The E Street Band will be given the Award for Musical Excellence and Beatles manager Brian Epstein and original Rolling Stones manager Andrew Loog Oldham will both receive the Ahmet Ertegun Award for non-performers.

Way to go Hall of Fame! Not only did you choose to induct two pivotal bands – Nirvana and Kiss – you also gave the former the honor their very first year of eligibility!

I can’t wait to hear Dave Grohl’s acceptance speech and I really hope that he and Krist Novoselic perform. What an amazing tribute to Cobain and grunge in general. On another note, who knows what drummer Courtney Love is marching to these days or if she is even invited to the Hall of Fame induction to this but if does attend I hope she plans on being gracious and positive. Otherwise she needs to stay home.

Although Kiss have been eligible for the last 15 years, they didn’t get the nod until now which is absurd. Especially since the band has sold more than 40 million albums in the United States, of which 20 million have been certified by the RIAA, and their worldwide sales exceeds 100 million records, making them one of the world’s best-selling bands of all time.

While Peter Gabriel was inducted in 2010 as a member of Genesis, this year he will be inducted as a solo artist which is exciting since only 19 performers in the history of the Hall of Fame have been inducted twice or more. Gabriel is joining an elite group of double inductees including Eric Clapton, David Crosby, Michael Jackson, Paul McCartney, Jimmy Page, Rod Stewart and Neil Yong, among others.

Already members of the Songwriters Hall of Fame (2003), Hall & Oates penned six number-one hits including “Rich Girl,” “Kiss on My List” and “Private Eyes,” along with many other Top 40 hits.

No stranger to awards, Linda Ronstadt has earned 11 Grammy Awards, two Academy of Country Music awards, an Emmy Award and has numerous United States and internationally certified gold, platinum and multi-platinum albums. She has also earned nominations for a Tony Award and a Golden Globe award. Just add the Hall of Fame to your list Linda!

Even though Cat Stevens became Yusuf Islam in the late 70s and auctioned off all his guitars, everyone knows and loves songs like “Wild One” and “The First Cut is the Deepest” so I guess it makes sense that he’s being inducted. It will be interesting to see if he performs – could be fun!

Looking forward to watching the ceremony – congrats to all the artists on making it into the most exciting Hall of Fame in the music industry!