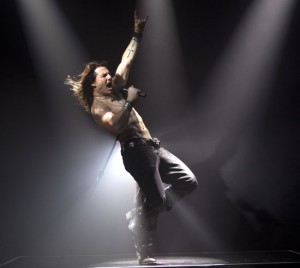 Why aren’t more people talking about this movie? Is it because it’s a Broadway adaptation and people are over that? (I.e. Chicago was adapted in 2002, Rent in 2005, Dreamgirls in 2006, Hairspray in 2007 and Footloose in 2011). Or is it because there are people out there who hate on 80s music? What is the deal?

In my 80 music-loving opinion I can think of many reasons to get excited for this movie:

It features music by Def Leppard, Poison, Twisted Sister, Foreigner, Journey, Joan Jett and more. If that’s not a killer soundtrack I don’t know what is! And even if you don’t like 80s music the ensemble cast is amazing: Tom Cruise, Alec Baldwin, Catherine Zeta-Jones, Mary J. Blige and Paul Giamatti, among others. If those aren’t heavy hitters I don’t know who is!

From what I’ve heard the film tells the story of a small town girl (Julianne Hough) who falls in love with a larger-than-life rocker (Tom Cruise) with 80s favorites providing the backbone of the story. Fun side observation: Tom Cruise’s long-haired, tattooed character is Stacee Jaxx which I’m assuming is a nod to Motley Crue’s notorious lead guitarist and 80s metal institution Nikki Sixx. Nice touch!

I really think this movie is going to be fun so do yourself a favor and watch the trailer for Rock of Ages. As far as this movie goes, June can’t come soon enough!