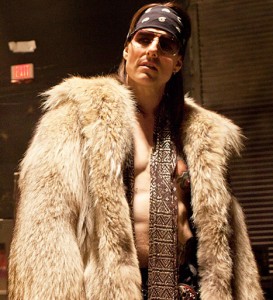 First I saw the movie Rock of Ages which I’ve been looking forward to since the first trailer. A movie that features some of my favorite music starring Tom Cruise? Give it to me now! (All I need is a Brad Pitt horse movie to come out and I can call it a day for movies for 2012).

Based on the Broadway musical, Rock of Ages includes songs by Bon Jovi, Guns N’ Roses, Joan Jett, Def Leppard, Foreigner, Journey, Poison, Pat Benatar, Warrant, Whitesnake, Night Ranger, Twisted Sister, Quiet Riot, Skid Row and the Scorpions – just to name a few. Although the plot is thin at best (middle state farm girl comes to the big, bad Sunset Strip in 1987 to follow her dreams and become a singer) seeing Cruise as rock legend Stacee Jaxx was worth every penny I paid to see the movie and then some. Cruise’s character was a mix of many 80s rocker personas (he loves women, booze, motorcycles and general craziness) but the way he was dressed –bandana, aviators, fur jacket, laced up leather pants, cowboy hat and no shirt – was no question based on Axl Rose. And his character’s name was definitely a shout out to Motley Crue’s notorious guitarist Nikki Sixx.

Cruise was so good as Stacee Jaxx that even the haters have to admit that he was electrifying. The saunter, the crazy-boozy eyes, the stage presence and his voice (which apparently he practiced five hours a day to perfect) were immeasurable. Cruise took songs that everyone knows and made the audience believe he actually wrote them. It made me want to go see Stacee Jaxx live – and then I remembered that he doesn’t actually exist. But you know who do exist? Poison and Def Leppard! And they, along with Lita Ford, are on the Rock of Ages Tour. A coincidence? Hmmm…..

Last night those three 80s legends performed in the Mile High City and it was like seeing the movie I had just seen except it was live! While Ford is a Runaways legend and was a fun opener (remember she was one of the few girls who spent her time on the Sunset Strip playing guitar rather than being a groupie) that’s not why I was there. I was there to see Poison (a band I had never seen before) and of course Def Leppard who I had seen at Red Rocks in 2006. Bret Michaels, C.C. DeVille, Rikki Rockett and Bobby Dall put on a hell of a show which I expected but was so glad to finally see for myself. No question that Michaels is a fabulous front man and although I can’t believe C.C. is still alive he is probably one of the more underrated guitarists from the 80s rock scene. Next was Def Leppard who definitely brought their balls to that stage. Turns out Denver loves Def Leppard! I still can’t believe how people were freaking out over that band!

Even though it’s been 30 years since the Sunset Strip was in its prime, the music that earned its voice there is still thriving. In the last year I’ve seen Guns N’ Roses, Van Halen, Lita Ford, Poison and Def Leppard. In August I’m seeing Kiss and Motley Crue. Whoever said rock and roll is dead needs to get a grip – all these decades later and it’s still going strong.