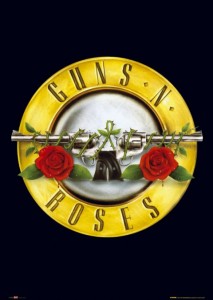 It’s the year of the 80s for the Rock and Roll Hall of Fame!  One of my favorite bands, Guns N’ Roses, has been nominated for the Class of 2012 along with Joan Jett and the Blackhearts (love her), the Cure, Eric B. and Rakim, the Spinners, the Small Faces/Faces, Freddie King and Rufus with Chaka Khan.  All of which are all hitting the ballot for the first time.

Previous nominees Beastie Boys, Laura Nyro, War, Donna Summer, Donovan and Red Hot Chili Peppers also made the cut. The top vote-getters will be inducted on April 14, 2012 in Cleveland, Ohio, home to the Rock and Roll Hall of Fame and Museum.

Artists that released their first single or album in 1986 or earlier were eligible for this year’s ballot which means a few things: a) I’m getting old. b) More of my favorite bands and artists are going to be getting the recognition they deserve. c) If Guns make the cut I’m actually going to watch the ceremony on television this year just to see if Axl shows up.

Last year the Beastie Boys (another favorite of mine) were nominated but didn’t make the cut which is surprising because even though they are technically a hip hop group, their innovative rock and roll infused rap verses have made them true pioneers of music as a whole. Joan Jett missed the nominee cut last year so I’m glad to see her on the list this year.

Now back to Axl – historically many bands have put aside their bullshit to perform at the coveted Rock and Hall Fall of Fame induction ceremony.  So the big question is will Guns N’ Roses follow in the footsteps of bands like the Talking Heads, Cream, the Police and Led Zeppelin, put aside their issues and make everyone’s night.

An Axl quote from 2008 doesn’t seem too promising:  “Not to offend anyone but personally I don’t have an interest and other than inducting Elton don’t quite get what it is exactly and who decides what. It seems to mean more to some than others and more so amongst fans. It’s nice to get recognition and have some form of acceptance but in regards to joining others the price is too high and just not worth it. It’s a ways away and seems a bit presumptuous to be contemplating being inducted now.”

Regardless of Axl’s obnoxious comments I’m still very excited for Guns – like it or not they have sold more than 100 million albums worldwide and their 1987 major label debut album, Appetite for Destruction, has sold more than 28 million copies worldwide.  It reached Number one on the US Billboard 200 and is also the highest-selling debut album of all time in the US.

My good friend Justin Reed’s response to the news about the band’s nomination:  “It’s about damn time.”