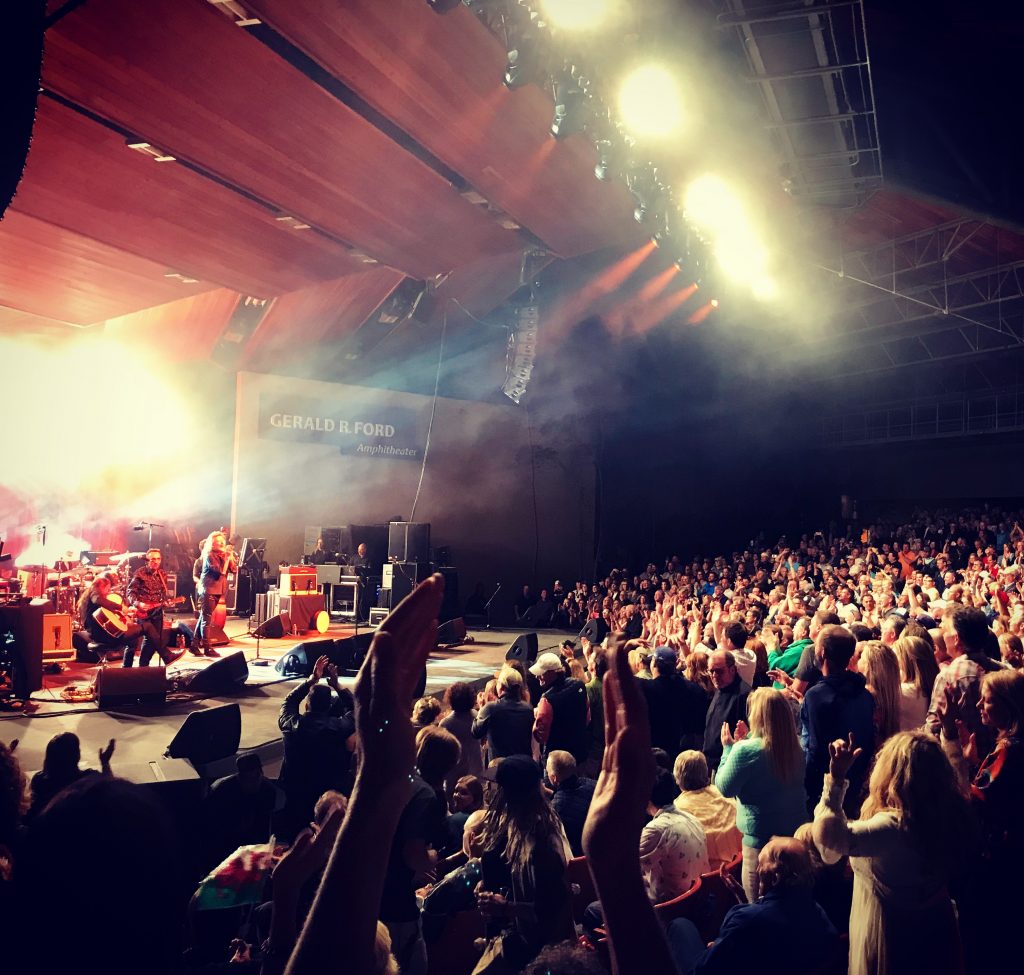 When I found out back in March that Robert Plant – THE Robert Plant – was not only coming to Colorado but was going to be performing at the Gerald Ford Amphitheater in Vail, I was ecstatic. Beyond ecstatic. However, because the venue only seats 2,565 people, I knew acquiring tickets was going to be a challenge. Turns out, “challenge” was an understatement. But thanks to an extremely generous family friend, we got two tickets. I would have gone to the ends of the earth to get tickets because there was no way I was going to miss arguably the best voice in rock and roll history – even if he is 69 years old.

Like so many rock and roll enthusiasts, I’ve been a Led Zeppelin fan for as long as I can remember but assumed that there was no way I’d ever see the band live. Well – last night’s show was pretty close. Backed by the Sensational Space Shifters, comprised of Justin Adams (guitar), John Baggott (keyboards), Juldeh Camara (violin), Billy Fuller (bass), Liam “Skin” Tyson (guitar), and Dave Smith (percussion), the legendary Plant absolutely blew the roof off of Ford Amphitheater. Clad in leather plants and a blue button down shirt, his curly hair made him look almost lion-esque. And roar he did – right through a 13-song set that included “When the Levee Breaks,” “Four Sticks,” “Going to California,” “Babe, I’m Gonna Leave You,” “The May Queen,” and “Whole Lotta Love.” I still can’t believe it happened.

Led Zeppelin formed in 1968 which means 2018 marks 50 years (FIVE DECADES) of Robert Plant making music. Guess what? His voice still sounds amazing. That tremendous flexibility and versatility is transcendent and it was clear from the enormous grin across his face that he still loves what he does for a living. When the set began I couldn’t believe what I was hearing. “When the Levee Breaks” from 1971’s Led Zeppelin IV?! Was this real? It was. And when Plant changed the words of “Going to California” to “Going to Colorado” the crowd erupted. I bet people in Grand Junction heard the us during the entire 90 minutes he performed. There was no sitting down.

People like talking about the top five artists and/or bands they’ve seen live. I’ve been lucky enough to see some big rock and roll names over the years (Tom Petty, Eric Clapton, Prince) and some artists with huge voices (Mariah Carey, Whitney Houston) but this was something else. What will always set Led Zeppelin apart from other bands is the unique combination of Plant’s remarkable vocal range and the extraordinary musicianship of Jimmy Page, John Paul Jones, and John Bonham. I’m happy to report that the incredible vocal range is still there and every member of the Space Shifters is extremely talented. Plant was a force last night and everyone who witnessed his greatness will be talking about it for a long time.

For the Colorado kids who missed last night – don’t worry! He’ll be back on September 15 to headline the Telluride Blues and Brews Festival. Trust me, it’s worth the time and money. I still can’t believe it happened.