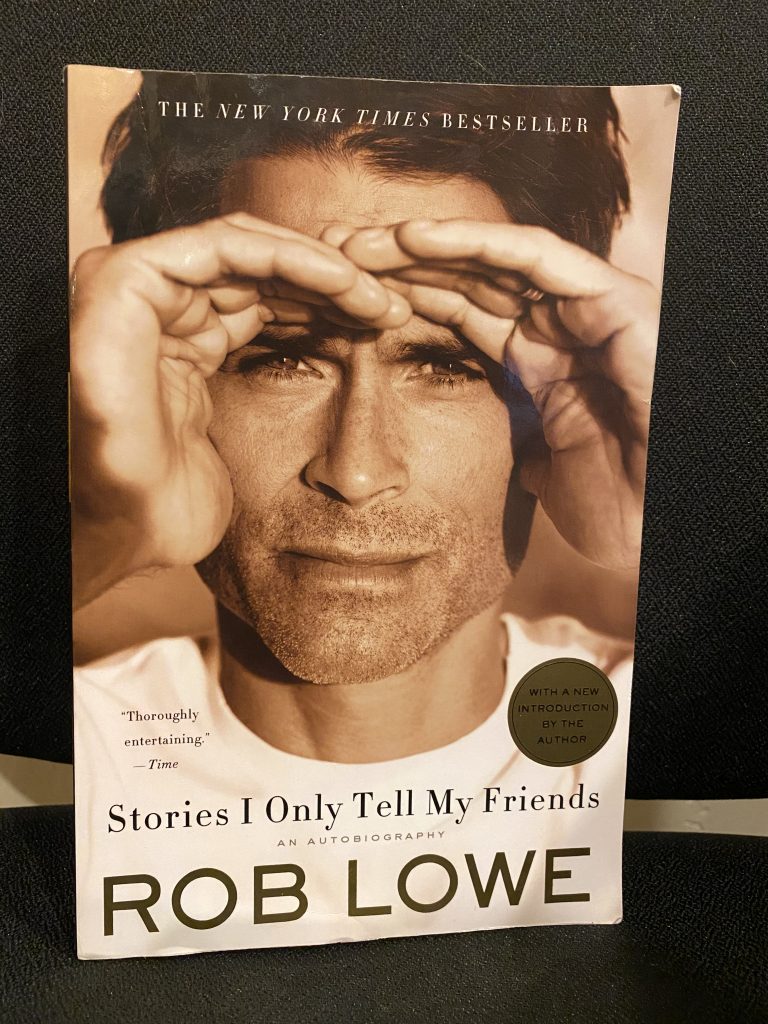 From the beginning of the book – literally line one in the Introduction – it is clear that Rob Lowe has a complicated but loving relationship with his mother. The first line of his autobiography, published in 2011, says, “My mother…was the first writer I ever knew.” But she also had some serious hypochondriac tendencies and spent a lot of time in pajamas and not leaving the house. She also goes to an allergy clinic, marries a man who prescribes her medication she doesn’t seem to need, and they both kind of check out while Lowe and his brother Chad are left to their own devices as they roam around Malibu before it became the ritzy area it is today.

As the years go on, his mother and husband number three get into a cycle where she has a psychotic break after going off the drug he prescribed for her. She wants him investigated for overmedication and he wants her committed. When mom finally divorces husband number three, Lowe explains that she miraculously becomes “no longer incapacitated by her many mysterious illnesses. And so, with her late-in-life rebirth, I get the mother I have always wanted.” His mother’s influence ebbs and flows throughout his life and is clearly someone who had a major impact on his life.

Overall, Lowe’s writing is insightful, witty, and descriptive. For example, he describes 1970s Malibu as a “breath-taking, palisaded promontory [that looks like a] sawed-off volcano, jutting its jagged cliffs into the crashing surf below.” He also points out that people in show business cannot have “skin like tracing paper,” portrays Patrick Swayze as a “relentless spirit” and talks about Aaron Sorkin’s “specificity of language.”

There are several common themes throughout the Stories I Only Tell My Friends: 1) He literally meets Hollywood royalty by accident at every turn. Chris Penn goes to his middle school, Charlie Sheen and Emilio Estevez live down the street, he stumbles on the set design for the “cheesy Western set in outer space” that eventually becomes Star Wars, he picks up a girl for a date and her father happens to be Cary Grant, he meets Janet Jackson when she decides to quit acting and try music, John Cusack was an extra on one of the projects he was working on before becoming a major actor, Bruce Willis was a bartender who was getting ready to try acting (interesting with the later Demi Moore connection), he randomly runs into Bill Murray in a hotel hallway, and the list goes on and on. 2) Lowe talks about running from his issues starting at an early age when he felt like didn’t belong anywhere. As a teen, he uses alcohol to quiet his demons and his inner voice which becomes a serious problem for him throughout adulthood until he gets sober in 1990. 3) For some reason, throughout his career, his scenes get cut, he is omitted from magazine photoshoots, and is forced to take pay cuts. He continues to get left out and I don’t get it. And he never gets to the bottom of it.

Another commonality is that Lowe is careful to tell juicy stories without too much squeeze. He acknowledges his drug and alcohol use through anecdotes about long nights turning into early mornings, explains that making national headlines for a sex tape scandal is not ideal, and that he almost ruins the relationship with the woman who becomes his wife and mother of his two sons, but doesn’t go into gory details. And you know what? I appreciate that. Some of my favorite musician’s bios get so redundant with the drug and alcohol use that it gets tedious and annoying. Lowe’s book is the opposite – the term “page-turner” is overused but I couldn’t put it down!

One of the most exciting parts of the book is when he’s a senior in high school, and about to give up on acting to attend USC or UCLA, until he gets a call about The Outsiders. While the film is clearly a classic that launched the careers of an incredible group of young actors turned movie stars, I’m surprised how much of the narrative is spent describing every aspect of the auditioning and filming processes, how it was his big break, and the aftermath. In fact, he spends 46 pages consecutive pages talking about every tiny aspect. Turns out, learning about all those details showcases his honed storytelling methods making for an excellent read. The fun behind-the-scenes stories include Matt Dillon’s lackadaisical demeanor, Tom Cruise’s intensity, the fact that Patrick Swayze was an expert an everything, Emilio’s choice to wear a Mickey Mouse shirt, Tommy’s ability to get him through a tough scene, etc. Lowe paints a vivid picture of the actors’ personalities which is both exciting and heartwarming.

While he’s going through a dry spell professionally, Saturday Night Live calls and his performance revitalizes his career and leads to other comedic roles in Wayne’s World, Tommy Boy, and Austin Powers. In fact, writing the book was Mike Myers’ idea. Lowe also credits his wife Sheryl for saving his life and helping him survive rehab where he learns one of the most important lessons: getting out of “the people pleasing business.” He talks about Sheryl and their two sons with so much unconditional love and pride that I actually made note of some of his parenting tips.

Additionally, as I was reading, I realized how many genres of acting Lowe has crossed and how many movies and television shows I’ve watched with him in it: St. Elmo’s Fire, About Last Night…, The Outsiders, Brothers & Sisters, Parks and Recreation, Californication, and The West Wing. He’s been part of show business for a long time and currently, at age 55, he’s one of the main characters on 911: Lone Star. As usual, he is fantastic.

“A little inspiration can go a long, long way”

“As a person navigating the waters of public scrutiny, you are often unable to hold on to personal heroes or villains.”

“Every parent feels that wondrous, prideful pang when they see glimpse of themselves in their children.”

“Kids learn from whoever is around them the most…They don’t really listen to speeches or talks. They absorb incrementally, through hours and hours of observation.”

“The best [acting] part is not the biggest, it’s the one that is the most memorable.”

“The survivors either naturally have that tough, uncompromising side, develop it later, as I thankfully did, or hire or marry someone who has it.”

“Sex, love, and commitment are story lines that travel well.”

“Cycles are almost impossible to identify until you are well into their sequence.”

“I’ve been grinding so long and have traveled so far and seen so much that I’ve doubled the standard emotional mileage. I’m way past my warranty.”

“I’ve had a career where I play guys you meet on page one. And on the first page of The West Wing, here comes a character named Sam Seaborn. Good name. Nice alliteration and romantic-sounding.”

Although Lowe ends up having the relationship with his mother that he always yearned for, he loses her in 2003 to breast cancer. But he is thankful that she came out of her haze in time to get to know her grandsons. I’ll always remember the way he emphasizes her importance regardless of what ailed her: “She was the one I wanted to impress most; she was my favorite audience.”