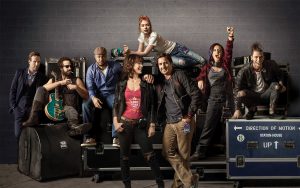 Judging a show by its first episode can sometimes be equivalent to judging a book by its cover but then again a first impression can be very telling. I wrote about Vinyl after watching the pilot and looking back I can see why I was excited about that show. It was raw, it provided a look at the underbelly of the music industry (rather than romanticizing it), and it produced one hell of a soundtrack. Although that show had some brilliant moments (i.e. the scene where Devon pretends that she doesn’t recognize John Lennon and the scene during which we find out how CBGB was born) but it also had a lot of superfluous screaming, drug use, and people acting so insane it was hard to take seriously. That being said I am surprised that HBO cancelled the show, especially after its immediate renewal announcement, but clearly Vinyl wasn’t worth its extensive production costs.

Ok on to Roadies. The only reason these two shows are being mentioned in the same article is because they both happen to be about the music business and are (were) both aired on premium networks. As far as I’m concerned, Roadies is almost the anti-Vinyl in that every character loves music more than anything which makes sense because the show was written by one of my favorite rock writers of all time, Cameron Crowe. For those who aren’t already fans, he brought the world Fast Times at Ridgemont High, Say Anything, Singles, Jerry Maguire, and Almost Famous which are some of my favorite movies for many reasons including: 1) Crowe was a journalist who followed bands like Led Zeppelin and the Eagles around for years so he knows exactly what he’s talking about. 2) He clearly understands how to write prolific stories and dynamic characters within those stories. 3) His soundtracks are perfectly selected.

When someone knows how to write and also knows how to use music as a framework for their story, or even as its own character, I pay attention. So, when I heard that Crowe was embarking on his first television adventure, of course I was excited. I still am. When I heard he was writing about roadies I thought to myself: Of course he is; they are an intrinsic background community of the music business that most people (including me) know nothing about.

A few days ago, Roadies premiered on Showtime and it was an interesting experience. Filled with people who clearly love the music but not necessarily all the bullshit that goes along with their job descriptions, the show introduces the audience to the motley crew that handles The Staton-House Band, a successful arena-level rock group that we haven’t actually heard play yet. Everyone in the crew is clearly mesmerized by the band’s music and everything they stand for then and now.

As per usual with all things Crowe, the soundtrack is as important as the characters who consist of a people of all ages and backgrounds. Each are dynamic in their own way but the one that really stands out is Kelly Ann (Imogen Poots) – the skateboarding electrician who is supposed to be on her way to film school but changes her mind by the end of the episode. Although Crowe seems to want viewers to fixate on the “work marriage” of tour manager Bill (Luke Wilson) and production manager Shelli (Carla Gugino), I find them to be a little cliché so far. Bill has been sober for two years and is divorced so the girls he sleeps with are 20 years his junior, while Shelli is married to a man she never sees because she’s on tour with Staton-House and he’s on tour with Taylor Swift (who gets a lot of flack throughout the hour). The relationship seems contrived but I’m hoping that will change by episode two.

In other plot news, we already have a conflict with “the Man” (a suit appropriately named Reg Whitehead played by Rafe Spall) coming in to this tight group and quickly firing the oldest of old-school members. He then gives a horrible speech about how the band is actually a brand. We’ve also met a psycho stalker girl who I hope plays a small role and Kelly Ann’s twin brother (played by rapper Machine Gun Kelly – not kidding) who looks like an emo nutjob but so far is as dynamic as his roadie sibling. After being fired from Pearl Jam’s tour, he shows up to see his sister and provides bootleg CDs for members of the crew like Crowe probably did with mixtapes decades ago.

In addition to learning more about the characters’ backgrounds, I definitely want to know more about the roadie culture and what exactly they’ve all given up to work for this band they love. Also, I want to hear the music that makes Staton-House so great. At least with Stillwater (from Almost Famous) we got to see the band’s talent in live clips throughout the movie. And one more thing – what the hell does Staton-House even mean?

Looking forward to delving deeper on Sunday – tune in if you’re a music fan.