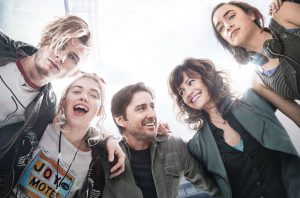 The two most recent episodes of “Roadies” took place in Denver and several cool things happened. Here are my favorites from the two-episode arc:

1) The super moon plays a huge role in the chaos that occurs.

2) Denver is the band’s hometown (and is clearly a place that matters to Crowe) which is why they play there for two nights.

3) I learned that Led Zeppelin made their North American debut in Denver on December 26, 1968.

4) It’s funny that several references to the altitude are made, but nothing about marijuana.

6) Bill plugs in an old boombox that was left on “play” mode and Bruce Springsteen’s “Radio Nowhere” comes on right where he left it several years prior.

7) Reg gets whacked in the forehead by someone swinging around their ski bag and not paying attention. Clearly those who wrote this episode have spent time in Colorado.

9) John Mellencamp was like a musical sage as he talked about Woodie Guthrie and the wisdom of his 100-year-old grandmother.

10) Sister/brother twin duo Kelly Ann and Wes are still the two best characters on the show.

11) Crowe continues to show us impressive new musical acts and, through his writing, remind us that he is in fact the golden god.