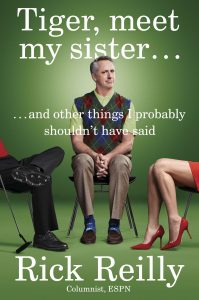 Rick Reilly is not my favorite writer – but he is a great writer. For years I subscribed to Sports Illustrated and, whether I liked the subject matter or not, I always read Reilly’s column which was always found on the inside back cover of the magazine. During his 23-year stint at Sports Illustrated Reilly was like Britney Spears in the early to mid 2000s – even if you weren’t a fan you always wanted to know what he was doing or talking about.

Maybe I’ve always followed his career because he’s a former Boulder kid like me. Reilly started his career in 1979 as an undergraduate assistant with the Daily Camera in Boulder, Colorado. (When I was a CU undergrad I wrote for the Colorado Daily and Campus Press). Next, in 1981, he moved on to be a football writer for The Denver Post (I moved to Denver and wrote for the Glendale Cherry Creek Chronicle).

In 1983 he left Colorado to write for the Los Angeles Times before joining Sports Illustrated in 1985 where he stayed until 2007. In 2008, he became a columnist for ESPN.com and wrote the back page column for ESPN the Magazine. Reilly also hosted ESPN’s interview show, Homecoming with Rick Reilly, and is a contributing essayist for ESPN SportsCenter and ABC Sports.

Reilly has also written over a dozen books but I’ve never been inclined to pick one up until I saw Tiger, meet my sister…and other things I probably shouldn’t have said (yes, that’s the actual title) in my local bookstore. I’m not a golf fan and don’t have much to say about Tiger Woods but, the fact that Rick Reilly, one of the most opinionated sportswriter ever, was actually admitting fault in the title of his book, definitely got my attention.

Anyway, the book is a collection of essays he wrote between 2008 and 2013 about a variety of people including famous athletes, infamous athletes, coaches, people who like sports, and people who overcame a lot to have something to do with sports.

A few memorable words from Reilly:

A few sentences from his self-written faux obit:

Reilly can be an arrogant son of a bitch but he does admit when he’s wrong:

He’s probably the most poignant when writing about his family, particularly his father:

One of the funniest sections was definitely when he breaks down the different types of people who work out at a gym. My favorites:

While Reilly can definitely be over-the-top, he can also be hilarious. Some of his comments and descriptions had me laughing out loud. He is also sappier than I remembered – he clearly likes the underdog – but knows when being harsh is necessary. Don’t get him started on the deception of Lance Armstrong or the disgusting acts committed by Jerry Sandusky and the fact that Joe Paterno let it happen. He lights them up and they deserve it. On a lighter note, his description of spending the day with Kobe Bryant was excellent and reading the section about Steph Curry when he was having his “breakout year” was fascinating.

The USA Today quote on the cover above the title of the book describes Reilly as: “The closest thing sportswriting ever had to a rock star.” I don’t know if I’d go that far – especially since Reilly is wearing a sweater vest, khakis, and loafers on both the front and back covers – but he’s definitely a ballsy writer who is equally skilled at using eloquence and sarcasm. Thanks Mr. Reilly, from one Boulder kid to another, for being fearless while writing with finesse.