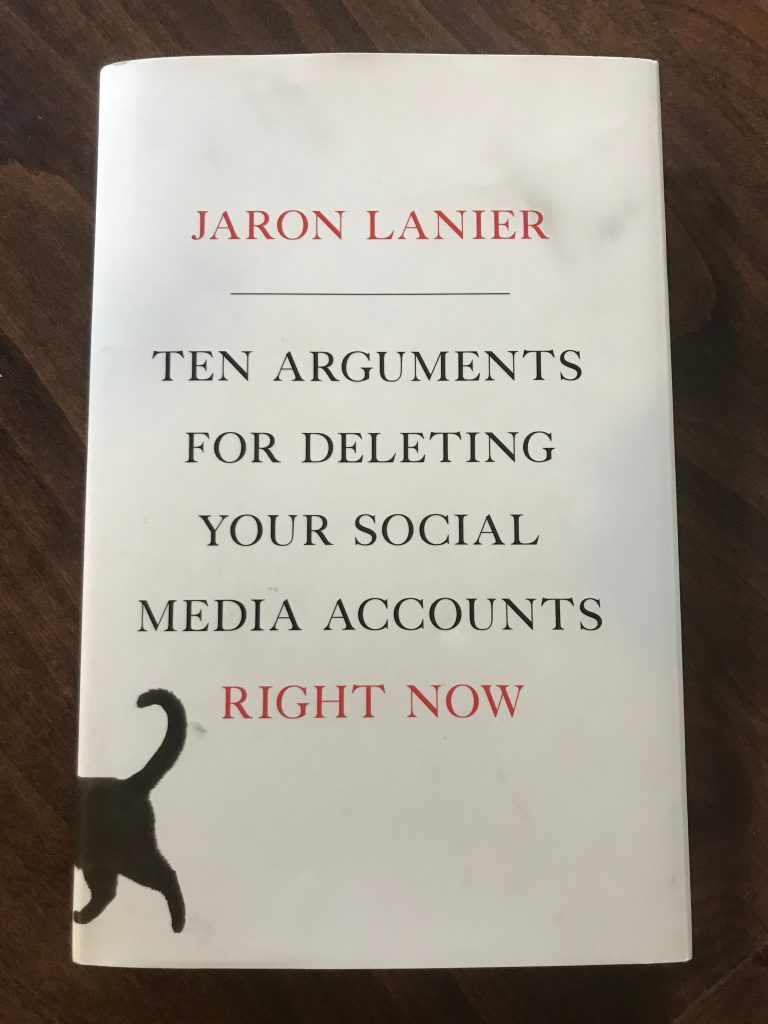 Written by Jaron Lanier, a scientist, musician, and bestselling writer, this book is abrasive literally from cover to cover. When you pick it up and see the title written in black and red capital letters, you might assume that you’re in for an opinionated read. You would be right. I read this book because we’re teaching it to our students next month along with Kate Fagan’s national bestseller What Made Maddy Run, both of which examine the effects of social media on our culture.

Lanier purposefully makes his stance clear in the title and he hammers his point home for 144 pages. Among many dramatic comparisons, he relates social media to addiction and says the founders of Facebook are partially responsible for behavior modification which “entails methodical techniques that change behavior patterns in animals and people.”

When he quotes Sean Parker, the first president of Facebook, it’s a bit alarming to read the drug reference and the blatant reasoning behind social media exploitation: “We need to sort of give you a little dopamine hit every once in a while, because someone liked or commented on a photo or post of whatever…you’re exploiting a vulnerability in human psychology…”

Chapter one is my favorite

The initial chapter of this book is definitely the most captivating because Lanier makes thought-provoking social and cultural points and has not yet introduced his annoyingly incessant acronym catchphrase called BUMMER which I’ll get to in second. For example, comparing social media users to dogs is both interesting and odd at the same time: “You are getting the equivalent of both treats and electric shocks when you use social media.” The author also makes an interesting point about the founders of online exploitation being those who invented digital gambling machines and websites.

Another reason chapter one is my favorite is because Lanier writes like a journalist (instead of a ranting author) by discussing both sides of the argument. He acknowledges that digital networks have value – especially in terms of efficiency and convenience. “Once you can use a pocket device to order rides and food and find out where to meet your friends right away, it’s hard to go back.” Amen. I couldn’t use my cell phone to make or receive calls for two days this week and it drove me crazy.

The beginning of chapter two is still thought-provoking because Lanier, unlike the journalists and psychologists who believe smartphones are the devil, rejects the argument that the smartphone is killing our society. Instead he blames social media. But he does add, “if you have good experiences with social media, nothing in this book invalidates those experiences.” Clearly Ten Arguments is for people who have been hurt by social media – in fact something significant must have happened to Lanier to prompt this brutal literary assault on such platform. He says, “smart people should delete their accounts until nontoxic varieties are available.” But will other varieties ever exist? Is that even possible? These same smart people should know that Facebook is a business. The creators got into it to make money and ending up changing the world.

Then on page 28 it all goes to hell when the author introduces the aforementioned annoying acronym. BUMMER = Behaviors of Users Modified, and Made into an Empire for Rent. Lanier uses this acronym constantly for the next 116 pages and it’s infuriating.

A few examples: “Much of the damage done by BUMMER can be undone by deleting your accounts, but the social loss of truth spills out from BUMMER and hurts even people who are not engaged directly with BUMMER at all.”

“BUMMER algorithms must put you into categories and rank you in order to do anything BUMMER at all…The algorithms fundamentally work to favor platform owners and advertisers, and those parties need abstractions of you in order or manipulate you.”

And this goes on and on. For over 100 pages. The ranting gets so repetitive that while he’s trying to drive his point home he actually loses people.

Throughout the next few chapters, Lanier does come up with a few gems. For example, of all the social networks, he considers LinkedIn to be the lesser of the evils. (He discloses that he has a professional association with the site but doesn’t have an account). Professional association or not, he makes a valid point about LinkedIn: “The difference is simply that users of LinkedIn have something to do other than compete for social appearances.” Very true. People are on the site to connect with others professionally – that’s why the word “connect” is used rather than “friend.”

On page 85 there is a mention of one of the major themes discussed in Maddy which is helpful for our class: “What bums me out is not some particular surface pattern – like seeing everyone else misrepresent their lives as being more wealthy, happy, and trouble-free than they are – but instead it’s the core BUMMER system… [which] makes me feel judged within an unfair and degrading competition, and to no higher purpose.” Another applicable point appears on page 89: “Suddenly you and other people are being put into a lot of stupid competitions no one asked for.”

While I’m a fan of social media – in fact, you’re most likely reading this article because you saw the link on my Facebook page – I understand that some people take it too far. There are many arguments about social media’s effect on body image and self-esteem, which can lead to comparison misrepresentation, that are issues for teenagers and a main focus of Maddy. But there is another side to all that.

Although some argue that people literally and figuratively filter their posts to make everything look glossy and positive, I value social media because it helps local businesses communicate with consumers without paying insane advertising rates. I also love photos – taking photos and seeing other people’s photos is a lot of fun. That being said, l strongly believe that social media is not a platform for revenge, passive aggressive behavior, or backhanded comments. Unfortunately, there are plenty of people use it for those things which is shame and might be the root of why Lanier wrote this book.

Ending on a high note

Chapter eight is extremely interesting because Lanier points out that social media being free to use has contributed to its popularity. He also comes up with a way to make social media better – pay a low monthly fee to utilize these platforms and if you contribute often through photos or videos, you can earn money. Finally! A solution instead of reading the word BUMMER over and over to an exhausting degree. He adds that allowing people to be paid for the value their data brings to digital platforms will make the world a better place. Bottom line: paying a nominal fee to use social media + the option for users to make money = the author’s best argument. And it’s not one of his top ten.

While Lanier is a clever writer, and clearly well-educated on many subjects pertaining to digital content, he’s also draining and at times comes off as tremendously paranoid. That being said, this will be an interesting book to teach – especially in conjunction with Maddy. Some students might hate it and/or disagree with it but they will have an opinion because all of it pertains to them. They are the generation whose first cell phone was an iPhone. They are also growing up with social media watching their every move. As a result, they may have such intense opinions that they can’t wait to write about it – and sometimes that makes for the best essays.

My favorite (and most relevant) quote appears on the penultimate page of the book and is about learning to write: “You can’t read well until you can write at least a little. The reason we teach writing to students is not in the hopes that they’ll all become professional writers. That would be too cruel. Instead, we hope they’ll learn what it means to write, and to think, which will make them more thoughtful when they read.” See you in September.