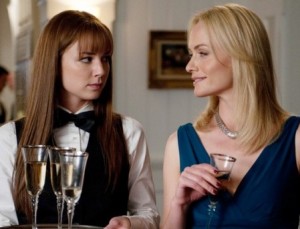 If you aren’t watching Revenge you should be. It’s one of the most fun shows on television right now and not just because its flashbacks are so intriguing they remind me of Lost.

A recap of my January 25 blog post description of the show: Taking place in the Hamptons where secrets flow like champagne, this show has brought back the nighttime soap. Even if you weren’t a Melrose Place fan you have to admit that show was highly entertaining and it’s got nothing on Revenge which is like Lost meets Dallas in couture. The twists and turns are fun to follow, the dialogue is as sharp as it is campy and sometimes I think that the women on the show stole their sneers from Billy Idol.

Four months later all of that is still pretty much true but the show has dug way deeper. Although a lot of it is soapy there are more angles, personalities, secrets and flashbacks and now some of the characters might be facing some serious jail time. Time they should have been serving since 1993.

The most recent episode was so good I’ve watched it three times. Dating back to 2002 (can people really remember that far back?) the episode opens with 50 Cent’s “In Da Club” blasting from – you guessed it – a NYC dance club. (Take a minute to remember what you were doing in 2002. I was graduating from high school in Miami, moving to Boulder to attend the University of Colorado and at age 18 I thought I knew it all. Wow was I wrong).

Anyway, we see our main character (who at the time answered to Amanda) as an angry teen who is using her millions to aid her self-destruction. At the beginning of the episode, despite Nolan’s pleads, she had not yet read her father’s journals that outline how we was framed, who was responsible and how to exonerate him. As the episode unfolds we watch as Amanda Version 2002 finally catches up on her reading, caters a New Year’s Eve party to check out the people who framed and murdered her father and decides it’s time for everyone to pay. It’s just six months after David Clarke’s death and the key players in his demise are toasting to another year. Gross.

We also get to see the 2002 versions of Jack and Nolan (my favorite character). All Nolan wants to do is help Amanda move forward but she is making it very difficult. Both he and Amanda are barely old enough to vote at that point so it’s fun to see what they were like 10 years ago – especially since now that they are in their late 20s running multi-million dollar corporations, buying houses with seven-figure price tags and helping with charities and campaigns.

So between the twists and turns, complicated but interesting back stories, a plane crash being a central plot point, strategically placed books and photographs and people turning on each other it sounds like a Hampton’s version of Lost to me – and trust me, that’s a good thing.