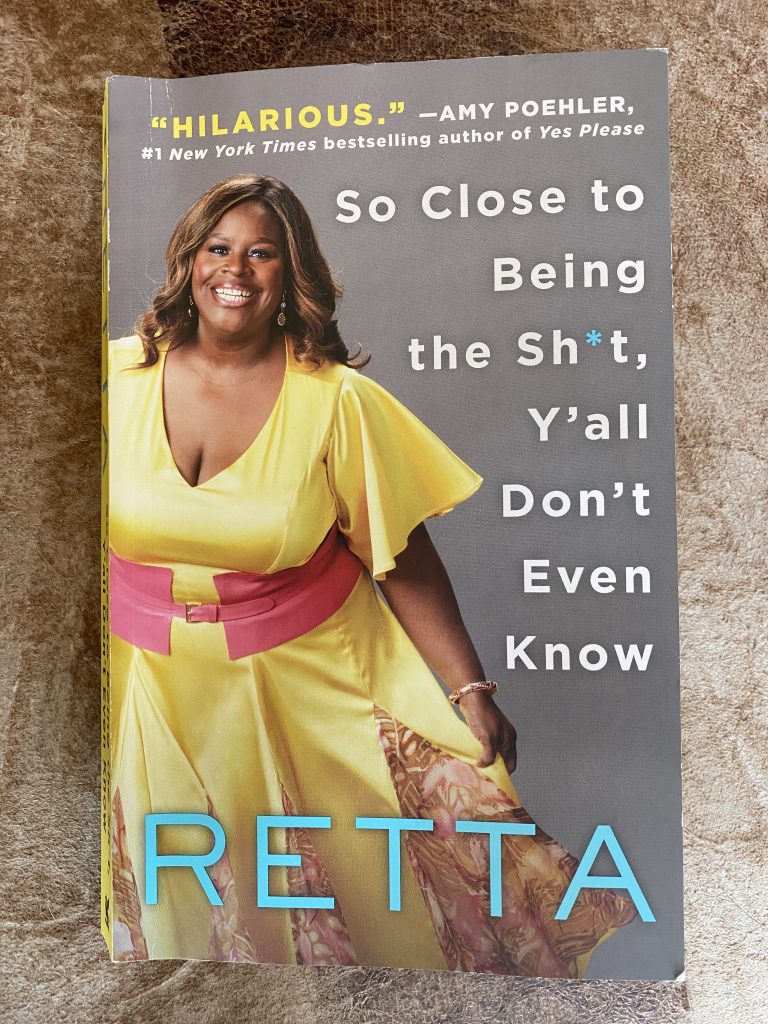 Just the title indicates exactly what this book is going to be like. Retta is raw, funny, and if you’ve ever seen her act, you can hear her speak in her writing. While most people probably know her as Donna from Parks and Recreation, I know Retta from her hilarious performance as Ruby on Good Girls. In So Close to Being the Sh*t Y’all Don’t Even Know, Retta is relatable but also reminds the reader that she attends Emmy, Grammy, and Golden Globe parties. She talks unapologetically about her weight and the horrifying people who have given her a hard time about it. The stories she tells are extremely clever but also honest and brave.

Marietta Sirleaf (the nickname Retta came from a guy she hooked up with in college!) got her start in entertainment by doing standup at a sorority charity event when she was a junior at Duke University. Her original plan was to go to medical school but things changed when she became interested in comedy and television and won Comedy Central’s stand-up competition in 1999.

The first story she tells is when she was supposed to audition for the part of Effie in Dreamgirls but was too scared to show up. Instead, Jennifer Hudson got the part, won an Academy Award, and was propelled into superstardom. As a result, Retta now says this to herself before a big audition: “Bitch, stop wasting time fearing the worst. Living through the worst is never as hard as fearing it. Fight the fear and go do what you gotta do. That’s what you came here for.”

Throughout the book, Retta is very candid about difficult topics like her weight, her injured knees and ankle, and issues finding clothes that fit, but talks about all of these things with an incredible sense of humor that is not self-deprecating. I appreciate her self-awareness and honesty – for example, she points out that although she is an organized person, that’s very different from being a disciplined person.

While she says it took some time to find her voice, she makes it clear that she never customizes her act to a specific audience. If someone hires Retta to do stand-up, she’s going to do what she’s going to do. “I never tailor my act to a specific audience. I just write what I think is funny, whether you like it or not is your business, not mine. I’ve been doing stand-up for a long time and you hire me based on what you know I do.”

Fun fact: Retta doesn’t want to be in your wedding or dress up for your Halloween party. “Last Halloween when people asked me what I was, I told ’em – a minority.” Solid gold. But when she throws a holiday party you better show your face because she’s going to give you something personalized and she’ll cut a bitch who RSVPs and doesn’t show up.

I’d never really watched Parks and Recreation before, but I’ve watched a few episodes since reading this book and it’s better than I thought – even though it uses that annoying format from The Office. Retta clearly has a lot of respect for her former costar Amy Poehler: “I’m grateful to Amy for showing me what being a gracious class act in this business is.”

Her series of vignettes read like you’re having a conversation with her but also like a stand-up routine – and she balances the approach perfectly.

“Growing up on the dodgy side of the middle class is a part of me.”

“The last thing I wanna look like is a hippie surfer who dropped out of boarding school and moved to Hawaii to live in his Saab at the beach.”

Retta’s parents were serious about school and her extracurricular activities: “I wasn’t allowed to just hang out whenever I felt like it, like some common street thug.”

“If I ever get engaged, I’m registering for Dixie products. Because I think we can all agree that dishes are some bullshit.”

“If you’re one of those people who doesn’t own a TV…I don’t even want to know you.”

Referring to the morning after her first-ever the Golden Globes when she was hungover: “A wave of pseudo-memories and legit ‘oh shit’-ness came flooding over me and woke me from my zombie state faster than an ice bucket challenge.”

“Does anything give you more of a sense of readiness than a phone at 100 percent? It’s a feeling of being capable of handling business.”

“I have a bit of animosity toward social media because I’ve dropped my phone on my face while lying in bed more times than I care to admit.”

“People loooooooove to be the first person to tell you something.”

Describing a fun night: “I was feeling myself more than Kanye feels Kanye.”

“Who is doing the PR for kale? And how can I get down with this company. Because kale used to be some bullshit underneath the salsa bins at Baja Fresh. Now it’s the headliner on every menu.”

Talking about a coffeemaker she got as a swag gift: “Ignored it like a white crayon.”

“I take television very seriously…with the kind of dedication and loyalty you might find in a scientologist or a golden retriever.”

“I’m not just your average binger; using a show for my own amusement for one intense weekend and then tossing it aside like a pen without ink or a pro athlete’s first wife. I get invested, almost to my own detriment.”

Talking about the L.A. Kings hockey players: “I was pleasantly surprised to find that more than one of them was hot like fish grease.”

Stylistically, she goes back and forth between her well-spoken prose and her hilarious ghetto girl slang. She also randomly abbreviates words and her use of footnotes is also hysterical because this technique is usually used in research papers – not comedic memoirs. If you’re a fan of Retta, definitely read this book. If you’re looking to laugh, read this book – it’s in the league of Tina Fey’s Bossypants and Amy Poehler’s Yes Please.