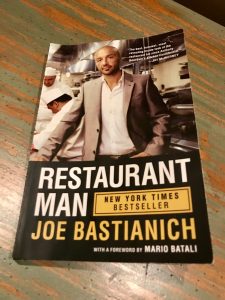 Joe Bastianich definitely knows how to tell a story. Punctuated with words like “fuck” and “motherfucker,” his story identifies someone who is 100 percent New Yorker by way of Italy. Raised in an authentic Italian family, Bastianich grew up in the restaurant trenches where he gained valuable (and old-world) insight on how to be a successful restaurant owner. After opening popular establishments like Del Posto, Babbo, Lupa, and Becco, among many others, he became a restauranteur. In fact, Bastianich now owns thirty restaurants worldwide with longtime partners Lidia Bastianich (his mother who he talks about with fervent respect throughout the book) and celebrity chef Mario Batali who seems to be the hippie yin to the author’s intense New Yorker yang.

My first impression of Bastianich came from watching him as a Master Chef judge for several seasons. Although he was extreme with his criticism and at times brutal towards the contestants, it was clear that he didn’t get to the Master Chef judging table by accident. Based on the way he handled the food created by the home cooks on the show, there was no question that he was as smart as he was arrogant – adjectives that encapsulate the feeling of the book as well. Sometimes he makes brilliant points and other times he sounds like an egotistical pain in the ass I’d roll my eyes at if I interacted with him in person.

Regardless of my thoughts on his personality, the book was a fun read because Bastianich, who most definitely writes like he talks, is a captivating storyteller. The book’s running theme (and title) is a term Bastianich defines and exemplifies multiple times – “Restaurant Man.” It all starts with his old-world father who came out of Italy and worked his ass off to make money running a restaurant. As a child, Bastianich was taught to be cheap in terms of money but not when it came to the experience, quality of the food, or the overall ambiance – something he kept in mind for all of his very successful restaurants.

Throughout the book, Bastianich reminds the reader that consistency is key. He goes even further to say that consistency is way more important than being trendy. Also, it is clear that authenticity is everything. His mother, who is clearly all about authentic food, was his original partner – Batali came a little later . While Bastianich is extremely arrogant, there’s something to be said about passion – something he definitely possesses.

“Whatever happened the night before, the story is going to be right there in the tip jar.”

“You have to strike a perfect balance between being a cheap motherfucker while still being selfless when it comes to the quality of your customer’s experience, which is really our goal.”

“Being tied to where you came from makes you who you are, and with a strong family there is nothing you can’t do.”

“A little madness keeps the big madness away.”

“There was more than meets the eye to pretty much everything.”

“I’ve always tried to use that same lesson, to invest in young people. Give them your time, share your knowledge, try to impart to them some of who you are.”

“Cultures build themselves on the bones of those who came before them.”

“I’ll forgo experience any day for someone who is willing to learn, listen, and get satisfaction and joy out of creating a memorable experience for the customer.”

“Humanity and imagination are [always] the key ingredients.”

“We never accepted anything just because that’s the way it was done.”

“Our MO – to interpret the authentic Italian experience and make it economically viable in the American restaurant market.”

“He’s a genius at being showy but not spendy.”

“His strength is being this interpreter of the authentic.”

“Mostly I looked as if I owned a successful restaurant. Mario looked like he was on his way to a Phish concert. We made a good pair.”

“Our partnership always worked because we were always unified in our success and in our failures…dig deep, live through the bad times, bite the bullet and throw in some more money, and believe.”

“The menu is the document that drives the business, that brings home the spirit of the restaurant. It’s the most important document in our lives…if there are misspellings on the menu, how much do you think the people who created it really care?…If the menu looks bad and has mistakes on it, get the fuck out.”

“I think part of being a dynamic and versatile restaurant is offering people options. That’s what it’s all about. Dining options.”

“The rule at Babbo is, we’ll let you take anything off a dish but we won’t let you add things in, because it’s not your job to write the menu. It’s ours.”

“The price is driven purely by supply and demand, mystique and marketing, and ratings.”

“It takes a lot of passion to want to exist in the future. You have to respect that.”

“The customer is not always right…We have to be able to say no. You can’t come into one of my restaurants and think that you are going to reimagine our menu with substitutions or your special needs…Can we turn the music down? No, we can’t. This is how we play the music.”

“I’m always a champion of this bottle and the next bottle – you can pin an entire generation of hangovers on me. But it comes from a genuine desire to share. You can’t blame me for that.”

On drinking a bottle of wine a day: “A bottle of wine is nothing, hardly even a middle finger to the old ghosts of Prohibition. It’s actually good for you. Wine promotes balance and beauty in life.”

“There is no doubt that I invented the ‘everything bagel.’ This is where stones mentality meets Restaurant Man’s instinct to be cheap and find ways to use shit you would normally throw out in order to innovate and create a superior product.”

“Having your name on a bottle that people are drinking from is a heavy responsibility.”

“Restaurant Man is in the entertainment business. Every night I put on a show. The meal is just the visible part of the iceberg.”

“If you’re a stand-up person and you’re note a douchebag, you don’t have to distance yourself from the media. In fact, they’d usually rather hear it from the person who’s creating the mayhem.”

“In the long term, what keeps restaurants viable is just consistency. That’s what people want.”

If you’re a fan of creative food, family business, and reading about how people got where they are today, purchase this book. You’ll get a kick out of the author’s humor, intelligence, and inability to resist telling the reader exactly what he thinks.