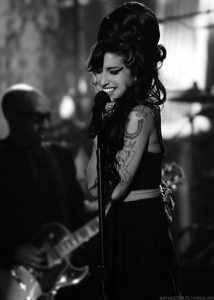 Tomorrow marks five years that Amy Winehouse was found dead in her London apartment due to alcohol poisoning. She was 27 years old. Although her death was not shocking (her struggle with drugs and alcohol was well-known), it was and still is extremely sad since Winehouse was so young and had an enormous voice that uniquely blended blues, soul, and jazz.

Here are is a list compiled by Rolling Stone that features some excellent unreleased material:

My favorites are “Trilby” and “When My Eyes” because they showcase her extraordinary talent and refusal to be contained in one genre.

While Winehouse’s 2003 debut album, Frank, earned critical success in the UK, her 2006 album Back to Black gardened the attention of the entire music world. She won five Grammys in 2008, tying the then-record for the most wins by a female artist in one night. Her wins included three of the “big four” awards: Best New Artist, Record of the Year, and Song of the Year. Additionally, Back to Black posthumously became, for a time, the UK’s best-selling album of the 21st century and, in 2012, Winehouse was ranked 26th on VH1’s “100 Greatest Women In Music” list.

In an effort to raise money for the Amy Winehouse Foundation, a charity that was set up by her family that works to prevent the effects of drug and alcohol misuse on young people, Winehouse’s father is slated to perform songs at a jazz club in London this weekend. Although I appreciate the Winehouse family’s effort to keep their late daughter’s name relevant, I feel like a concert at a jazz club in London is not enough. Winehouse was more than just a singer – with her exceptional voice and distinctive look she brought blues back to the mainstream in a way that remains incomparable to anyone in the last few decades. Clearly an old soul, in her twenties Winehouse recorded a duet with Tony Bennett and was frequently mentioned in the same sentence with icons like Billie Holiday and Aretha Franklin.

Because of her frail frame and horrendous track record with drugs and alcohol, I understand why people tend to focus on the addiction issues that killed her rather than her voice (a la Whitney Houston), but her legacy is so much greater than all of that. Yes, she represents another cautionary tale but she was also a huge loss in terms of talent and storytelling for the music industry. I remember where I was when I heard “Rehab” for the first time and thinking, “This song is revolutionary and incredible – who the hell is singing?!” Next thing I new Winehouse was on the cover of Rolling Stone.

Because there unfortunately isn’t really anything innovative to learn from Winehouse’s death, I guess the best thing to do is acknowledge her talent by playing her records and remind ourselves that health is what’s most important.